The huge bone belonged to one of the largest creatures to ever walk on land.

by Mihai Andrei
in Biology, Geology, News
A A

There’s big bones, and then there’s this. 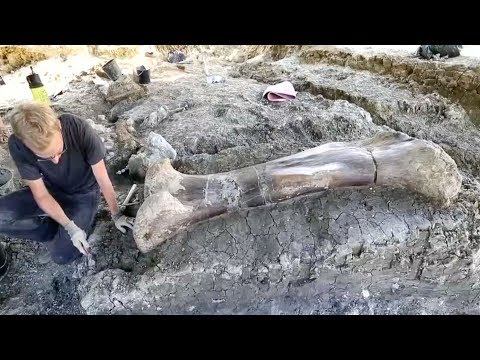 The city of Cognac in France is known for the drink named after it — but among the paleontology world, it’s also famous for something else. Close to the southwestern city lies one of the most productive dinosaur fossil sites in the world. Over 7,500 fossils, belonging to over 50 different species, have been found at the site since 2010, including some belonging to the largest animals that ever walked on land.

Paleontologists have been working on the site all summer, and they recently came across a bone buried in a thick layer of clay. Now, after it has been completely excavated, the bone confirmed the researchers’ hunch. The two-meter long femur at the Angeac-Charente site belonged to a sauropod.

Sauropods are a four-legged group of dinosaurs that were widespread in the late Jurassic era some 140 million years ago. They had very long necks, long tails, and small heads relative to the rest of the body. They were herbivorous and grew to enormous sizes.

“This is a major discovery,” Ronan Allain, a paleontologist at the National History Museum of Paris told Reuters. “I was especially amazed by the state of preservation of that femur.”

“These are animals that probably weighed 40 to 50 tonnes.”

It’s unclear just what type of sauropod this was, although further lab analysis will help clarify the issue. Nevertheless, the finding is spectacular — not only through its sheer size but also due to its excellent state of preservation. All fossils are fragile and tend to collapse, but fossils this large are especially vulnerable.

“We can see the insertions of muscles and tendons and scars. This is rare for big pieces which tend to collapse in on themselves and fragment,” Allain added.

Its excellent preservation is owed to a special environment. Angeac-Charente, now a vineyard, used to be a marsh, which offers an excellent fossilization environment.

A sauropod thigh bone found at the same site in 2010 was 2.2m long and weighed 500 kilos, according to local paper La Charente Libre. Other notable findings from the site include bones of stegosaurs and a herd of ostrich-like dinosaurs.