Just a bit of fake news presented in context along the factual is enough to negate the effects of bogus information.

by Tibi Puiu
in News, Psychology
Reading Time: 6 mins read
A A
Share on FacebookShare on TwitterSubmit to Reddit 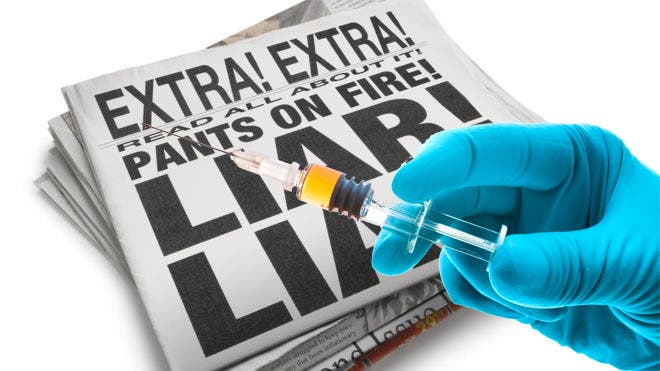 Taking hints from vaccines, a group of researchers has devised an immunization method against ‘fake news’. In a typical vaccine, a piece of the virus that causes the illness is inoculated in a dormant form to build the body’s resistance. Likewise, inoculating people against so-called ‘alternative news’ by exposing them to a small dose of misinformation can stop myths or plain lies from propagating, provided misinformation tactics are presented.

The study carried out by researchers from the University of Cambridge in the UK, Yale and George Mason State, US, couldn’t come at a better time. It follows hot on the footsteps of one of the most divisive presidential campaigns in U.S. history, partly fueled by disinformation at the hand of fake news outlets which purposely propagate hoaxes and lies.

Fake stories like those stating that ‘Pope Francis and actor Denzel Washington had endorsed Donald Trump‘ or that ‘Protesters at anti-Trump rallies in Austin, Texas, were “bused in”‘ have been shared hundreds of thousands of times on Facebook and became viral. The most out of this world fake news must be the “Pizzagate” scandal — a viral fake news which suggests hacked emails of John Podesta, the Clinton campaign chair, contain coded messages referring to human trafficking. These codes supposedly connect a number of restaurants and a number of Democratic Party members with a fabricated child-sex ring. This story had scandalized the public being shared thousands of times. On December 4, 2016, Edgar Maddison Welch, a 28-year-old man from Salisbury, North Carolina barged into the  Comet restaurant – one of the places ‘exposed’ by the conspiracy theory — with an assault rifle and fired three shots inside. No one was injured and Welch was later arrested. The man claimed that he wanted to investigate for himself and gave up when he found there were no minors kept captive inside the restaurant. It’s easy to imagine how all of this could have gone horribly wrong and people could have gotten killed.

The impact of fake news is incalculable at this point, but its power to influence people’s opinions is real and clear. A previous study from Stanford found that ‘up to a frightening 80% of surveyed US middle school students can’t tell the difference between fake news and actual news stories.’

Some of the blame for this wretched state of affairs that undermines democracy has been pinned on Facebook. As a response, the social network recently introduced a ‘fake news’ flag and warn system. If a story if flagged as a fake, it will later be verified by a trusted partner and users will be warned the shared article might be bogus. Such measures are much welcome and necessary but not nearly enough because everyone shares the blame.

There will be some who believe a partisan audience can’t be swayed to reason no matter what you do. However, the present study seems to suggest there are ways to improve the public’s critical thinking and blanket communities against the viral effects of fake news spreading through social networks.

“Misinformation can be sticky, spreading and replicating like a virus,” says lead author Dr. Sander van der Linden, a social psychologist from the University of Cambridge and Director of the Cambridge Social Decision-Making Lab. “We wanted to see if we could find a ‘vaccine’ by pre-emptively exposing people to a small amount of the type of misinformation they might experience. A warning that helps preserve the facts. The idea is to provide a cognitive repertoire that helps build up resistance to misinformation, so the next time people come across it they are less susceptible.”

For their study, the researchers recruited 2,000 participants across the US spectrum of age, education, gender, and politics. The team chose ‘climate change’ as the broad topic of fake news, a polarizing subject for many Americans, despite the overwhelming scientific consensus. Climate change is often the object of deliberate misinformation at the hand of vested interests who funnel millions into such campaigns. Climate change stances are also influenced by political affiliation, making it a good subject to probe fake news.

First, the researchers selected an actual fake news story to work with. Various falsehoods that went viral on the internet had been rated for familiarity and persuasiveness. The winner was this assertion that ‘there is no consensus among scientists’ that CO2 release as a result of human activities will cause climate change. The Oregon Global Warming Petition Project claims it has a petition signed by 31,000 American scientists who support this claim. As debunked by Skeptical Science, “30,000 scientists and science graduates listed on the OISM petition represent a tiny fraction (0.3%) of all science graduates. More importantly, the OISM list only contains 39 scientists who specialise in climate science.” In reality, among climate scientists a.k.a the experts, “97.1% endorsed the consensus position that humans are causing global warming.”

That’s about it for the fake news story. What the researchers did next was to split the participants into various groups to test various fake news exposure scenarios. Beforehand, each participant’s current levels of scientific agreement on climate change throughout the study were assessed.

Some participants were shown only the fact about climate change consensus under a pie-chart form similar to the image above. This group reported a 20 percentage points increase in perceived scientific agreement. Another group was only shown a screenshot from the Oregon Global Warming Petition Project website. These participants dropped their belief in a scientific consensus by 9 percentage points.

When participants were presented with the factual climate change consensus pie-chart followed by the erroneous Oregon petition. Strikingly the two stories neutralized each other resulting in only a 0.5 percentage points difference in perceived scientific agreement. In other words, faced with conflicting information, these people remained undecided which side to choose. In many instances, a perceived state of polarization or debate is very lucrative for certain interests, like the oil&gas or tobacco industry, but that’s another story.

“It’s uncomfortable to think that misinformation is so potent in our society,” says van der Linden. “A lot of people’s attitudes toward climate change aren’t very firm. They are aware there is a debate going on, but aren’t necessarily sure what to believe. Conflicting messages can leave them feeling back at square one.”

The good news is that fake news can be rendered benign if preemptive measures are taken. To illustrate this point, the researchers gave two random groups in the study a ‘vaccine’ which could either be:

The general inoculation saw a 6.5 percentage point shift towards acceptance of the climate consensus, despite exposure to the fake news. The detailed inoculation resulted in a 13 percentage points increase. That’s still only two-thirds of the effect experienced by participants who had only seen the factually correct consensus pie-chart but still much better than neutralization.

Researchers were also careful to analyze the effects of fake news as a function of political affiliation. The findings suggest that fake news neutralizes the factual for both Democrats and Independents. Fake news vs factual overrode the facts by 9 percentage points for Republicans.

Following inoculation, however, the positive effects (two-thirds of the effect caused by the factual only) were preserved across all parties.

“What’s striking is that, on average, we found no backfire effect to inoculation messages among groups predisposed to reject climate science, they didn’t seem to retreat into conspiracy theories,” van der Linden said.

“There will always be people completely resistant to change, but we tend to find there is room for most people to change their minds, even just a little.”