We have a lot to learn from the humble dandelion.

by Mihai Andrei
in Biology, News, Physics
A A

There’s something poetic about blowing dandelions to the wind, but there’s also a lot of science to it. A new study has shown that dandelion seeds fly in a way that’s never been seen before in nature, and that could inspire a new generation of airborne sensors.

Blowing dandelions might have a romantic appeal, but for these plants, taking to the air is of utmost importance. Using their parachute-shaped bundle of bristles, their seeds can spread over more than a kilometre, sustained by nothing but wind power. This is essential for the plant to be able to spread out over large areas, which also helps explain why the plant is so common in many parts of the world. But a team of researchers working in Edinburgh, Scotland, realized that we don’t really know how dandelions are able to fly such a long distance.

“Dandelions (Taraxacum officinale agg.) are highly successful perennial herbs that can be found in temperate zones all over the world,” researchers write. “Dandelions, as with many other members of the Asteraceae family, disperse their bristly seeds using the wind and convective updrafts.”

Their long fights are a bit surprising because the parachute-like structure the flowers exhibit is, for the most part, empty — it’s filled with air, which at a first glance seems woefully unfit for taking flight. Essentially, instead of looking like an umbrella or a parachute, it looks more like the skeleton-like frame of a parachute — and having a porous parachute doesn’t seem to make much sense.

Dandelions use a bundle of bristly filaments, called a pappus, to help keep their seeds aloft for dispersal. After the pappus takes to the air, it also prolongs the descent of the seed, enabling it to be carried much farther away. This is not uncommon in the plant world, as many other species employ a similar strategy — but they have a wing-like membrane instead of the spiky pappus.

So Naomi Nakayama, Ignazio Maria Viola, and colleagues set out to study exactly what happens to the dandelion flight. They constructed a vertical wind tunnel to visualize the flow around freely flying and fixed dandelion seeds, employing long-exposure photography and high-speed imaging to monitor any effects. They illuminated the seeds with a laser to make the entire system easier to visualize.

Researchers found that air does indeed flow through the bristles of the pappus, but the amount of air is very closely controlled by the spacing between the bristles, and this is very important. This particular structure formes a stable, doughnut-shaped air bubble, floating around each pappus. They call this air bubble a vortex ring. 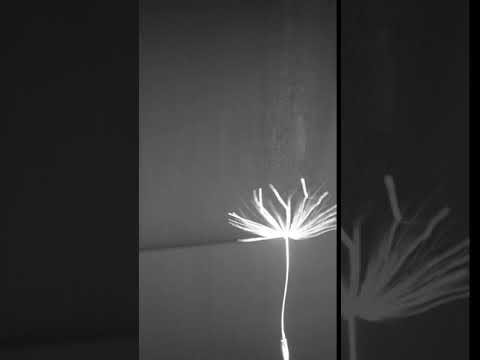 According to co-author Cathal Cummins, an applied mathematician at the University of Edinburgh, the pressure differences between the air moving through the spokes and the air moving around the seed creates the vortex ring. The vortex ring is detached from the seed body, and the dandelion’s pappus porosity is fine-tuned to stabilize this vortex.

The porous dandelion pappus consistently contains 90 to 110 filaments — no more and no fewer. If the number of filaments strays outside this range, the air bubble doesn’t form and the dandelion’s flight properties are negated. But if it stays within that range, the pappus delivers more than four times more drag per unit area compared to a conventional, wing-like membrane. The authors argue that this makes the plumed design far more efficient than a wing-like membrane for the dispersal of lightweight seed. It’s also a type of flight that’s never been observed before.

“The discovery of the separated vortex ring provides evidence of the existence of a new class of fluid behavior around fluid-immersed bodies that may underlie locomotion, weight reduction and particle retention in biological and manmade structures,” the paper states.

This is very significant, for more than just dandelions. This type of structure could be replicated in the design of small-scale drones that require very little or no power consumption at all. These drones could function as remote sensing or pollution sensors.