Inaction in the face of climate change is no longer irresponsible -- it's criminal.

by Mihai Andrei
in News
Reading Time: 5 mins read
A A
Share on FacebookShare on TwitterSubmit to Reddit 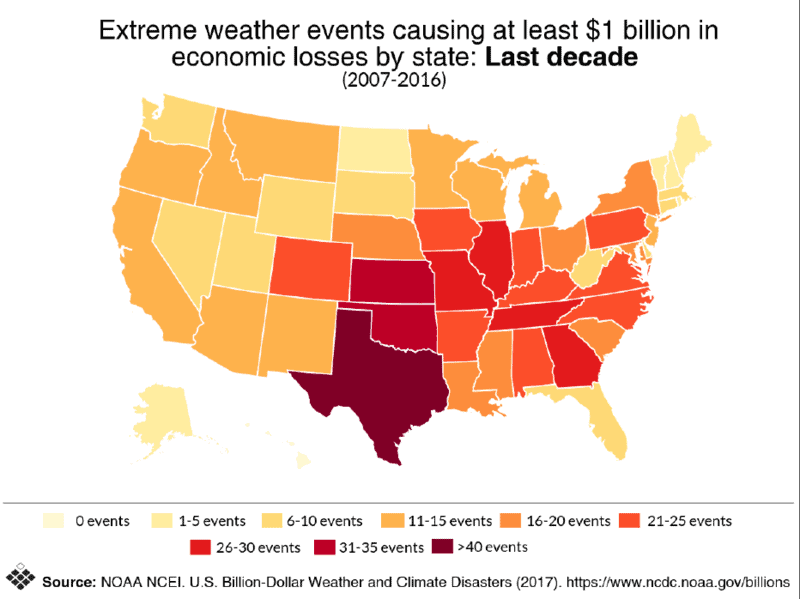 Last month alone, Western states suffered three major hurricanes and 76 wildfires, and these weren’t even included in the study.

According to a new study from the Universal Ecological Fund, the impact of climate change is already taking a huge toll, causing severe economic damage. In the past decade, climate change (which president Trump believes to be a hoax) cost the United States $240 billion a year. Weather extremes and air pollution from burning fossil fuels are among the main drivers of this cost, and things are only getting worse year after year.

“The increasing damage from climate-change related storms, wild fires, human health, agriculture loss and the like are taxing the potential of economic growth,” said James McCarthy, a Harvard University professor whose co-authors included Robert Watson, former chairman of the Intergovernmental Panel on Climate Change. The researchers weren’t paid for their work, according to Bloomberg.

The study broke down the costs. Air pollution caused by fossil fuels averaged costs of $188 billion / year, whereas losses from weather extremes such as droughts, heat waves and floods set the US back $52 billion a year. Of course, not all extreme events are caused by climate change, but there is no question that their frequency and intensity is being exacerbated by human activities. Just think about the extremely intense hurricane season we just had: warmer ocean temperatures are directly powering hurricanes by offering more moisture in the air. The connection between climate change and droughts and wildfires is even more straightforward.

“The evidence is undeniable: the more fossil fuels we burn, the faster the climate continues to change,” leading scientists wrote in the study published by the non-profit Universal Ecological Fund.

Researchers also show that the number of climatic events costing the US over $1 billion has grown dramatically decade after decade, in tight correlation to climate change. For instance, there were 92 extreme weather events that caused damage exceeding $1 billion in the United States in the decade to 2016, against 38 in the 1990s and 21 in the 1980s.
They also emphasize that some areas will be hit stronger than others, and many other costs haven’t been accounted for, due to their sheer complexity.

“The Gulf Coast will take a massive hit. Its exposure to sea-level rise—made worse by potentially stronger hurricanes—poses a major risk to its communities. Increasingly extreme heat will drive up violent crime, slow down workers, amp up air conditioning costs,” said co-author Robert Kopp, director of the Institute of Earth, Ocean, and Atmospheric Sciences at Rutgers University.