They give us honey. Now, bees could offer the best Instagram photos.

Most cameras, whether their embedded into your phone or drone for that matter, are crap when it comes to rendering colors as vibrantly as the human eye does. One team of researchers, however, argues that we would take far better vacation photos if cameras were built more like a bee’s eye.

The problem with modern commercial cameras is color constancy. That is, the ability to identify and distinguish color in any variation of light. It’s what helps us humans identify objects even in dim light. For instance, we know that a banana is yellow even though it’s sitting in a basket in the low light just before dawn. You look at the banana and you know it’s yellow but if you look at a picture of the banana taken in the same light that’s another thing.

“For a digital system like a camera or a robot the colour of objects often changes. Currently this problem is dealt with by assuming the world is, on average, grey,” said Adrian Dyer, an Associate Professor at RMIT.

It’s not just people that have good color constancy, bees do too. What’s more, they have five eyes, two of which are dedicated to sensing color which is mighty useful when foraging flowers is concerned. The other three eyes are not as specialized but can still sense color through receptors called oceli, which focus on the color of light. These oceli are always pointed to the sky.

Australian researchers at RMIT University, Melbourne, think it’s these oceli that relay information on light to the right parts of the brain responsible for processing color. This is to ensure the bee knows what’s it doing and approaches the right flower, unlike a camera which can be pick up the wrong colors.

For this to happen, information from the ocelli would have to be integrated with colors seen by the compound eyes. Indeed, this seems to happen after the researchers mapped the neural tracings from ocelli and showed neural projections fed into the processing areas of the bee brain. “It is rare that physics, biology, neuro-anatomy and ecology all fit together, but here we have it,” said Professor Andrew Greentree from the ARC Centre for Nanoscale BioPhotonics at RMIT, in a statement.

This discovery on color constancy could be implemented into imaging systems to enable accurate color interpretation. One day, we might all take better, sweeter pictures. And it’s thanks to bees. 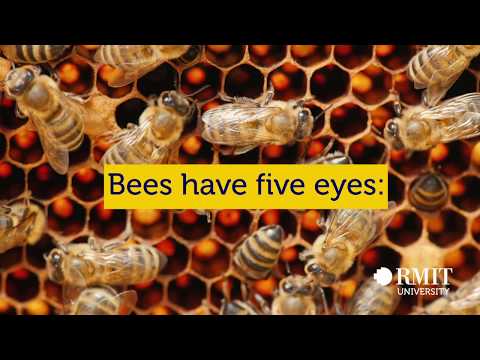 The findings appeared in the Proceedings of the National Academy of Sciences of the United States of America.