This new battery can fully charge your smartphone in 30 seconds

by Henry Conrad
in Nanotechnology, News
A A

An Israeli company has developed a battery that can charge a smartphone in just 30 seconds; to make things even more interesting, the technology could be scaled and power up electric cars in a matter of minutes.

Demonstrated at the 2014 Microsoft Think Next Conference in Tel Aviv earlier this year, StoreDot‘s prototype battery fully charged a Samsung Galaxy S4 in just 26 seconds. So far, the charging technology only works with Samsung’s latest technology, but it could be adapted relatively easily to all smartphone technology.

The company insists that despite the massive electricity flow, there is no reason to worry:

“To charge that in 26 seconds would require 100mAh [milliampere-hour] of charge to be delivered every second,” says Steve McCaskill at TechWeek Europe. “Put more simply, that’s 360A [amps] of current, which sounds a lot, but is of course only delivered in the secondary circuit of the charger (transformer). so your household wiring will be safe.”

Interestingly enough, StoreDot wasn’t interested in batteries at first. They started their work with semiconductors built from peptides. Peptides are amino acids that, when linked together, create proteins; they have a myriad of potential applications, most notably in medicine and cosmetics, but as the company found out, they can play a key role in battery technology as well, allowing a much faster power absorbtion. Using nano-technology to synthesize artificial molecules, StoreDot has managed to charge a phone fully in just 30 seconds.

“These are new materials, they have never been developed before,” said Doron Myersdorf, the founder and chief executive of StoreDot, whose investors include Russian billionaire and Chelsea soccer club owner Roman Abramovich.

But this technology could also be applied in other fields – it may actually be the breakthrough that electrical cars have been waiting for so long! Charging your car in just a few minutes could work wonders, and could pave the way for sustainable, electrical transportation.

For now, the prototype is pretty massive – about as big as a laptop charger, and they have an estimated 1,500 recharge/discharge cycles, giving it about three years of life. However, it may be quite a while before this technology actually hits the shelves – the earliest expected date is 2016. Meanwhile, you can enjoy this video of a phone charging in less than 30 seconds. 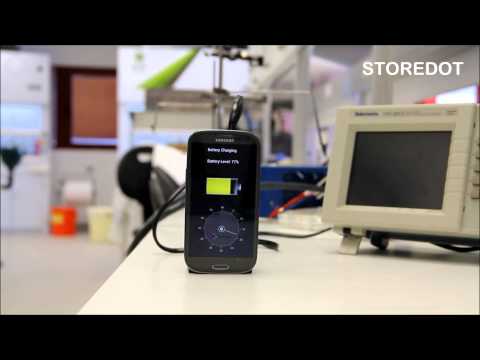