Does the Moon actually affect our sleep? The answer is likely no, study shows

The Moon and sleep 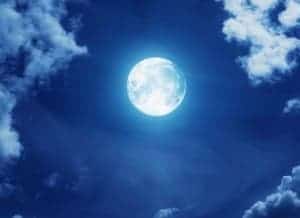 For centuries, people have thought that the Moon affects sleep patterns. But does it really? Many people report increased sleepiness when there is a full moon, and there have even been some studies linking the Moon with sleep patterns. However, a new study conducted by researchers from the Max Planck Institute of Psychiatry in Munich did not observe any correlation between human sleep and the lunar phases.

It’s a really old belief, and you’d expect someone has looked into it and figured it out by now, right? Well, so far, studies on the issue have had varying and contradicting results. The effects were very rarely estimated with an actual EEG. In some studies women appeared more affected by the moon phase, in others men. In others, there were no significant influences. So how do you avoid having yet another inconclusive study, and show actual statistical relevance?

Well, as any undergrad will tell you – get a bigger sampling size! That’s exactly what scientists did, analyzing the sleep data of overall 1,265 volunteers during 2,097 nights. All in all, that’s over 2 million nights of sleep.

“Investigating this large cohort of test persons and sleep nights, we were unable to replicate previous findings,” states Martin Dresler, neuroscientist at the Max Planck Institute of Psychiatry in Munich, Germany, and the Donders Institute for Brain, Cognition and Behaviour in Nijmegen, Netherlands. “We could not observe a statistical relevant correlation between human sleep and the lunar phases.”

They then looked onto pre-existing studies, to compare the results, and they found a very interesting thing. While most published studies tended to highlight a connection between the two, they found a lot of unpublished data which came back with negative results. This is probably the result of the so-called publication bias – or the drawer problem.

The same thing seems to be happening with the Moon and sleep.

“To overcome the obvious limitations of retrospective data analysis, carefully controlled studies specifically designed for the test of lunar cycle effects on sleep in large samples are required for a definite answer,” comments Dresler.