The station is in serious peril from all the junk we've left in orbit.

by Alexandru Micu
in News, Science, Space, Tech
A A

Space is a dirty place, so the ISS needs some lasers to blast it clean, researchers propose.

If you’re a fan of Sci-Fi, we’re in luck — an international group of scientists wants to see our most burning desire made real. They propose to install a laser defense system aboard the International Space Station (ISS) to blast at litter in the near-Earth orbit.

The idea of ‘arming’ the ISS with laser batteries isn’t new but we’re just now getting to a place where we can develop systems compact and reliable enough to be practical aboard the station. To jump-start development, an international team of researchers from France, Italy, Japan, and Russia is pooling their efforts, according to Boris Shustov, member of the Russian Academy of Sciences (RAS).

The system they’re considering would consist of orbital lasers aboard the ISS. It should be effective against the most common type of space debris around Earth — pieces that only measure a few centimeters.

The idea was first proposed by Japanese researchers back in 2015. The original project draft envisioned lasers using 10,000 optical fiber channels and would draw all of the ISS’s electrical output to work at full capacity, according to the team. That, understandably, isn’t a particularly attractive defensive system. The new project aims to provide the same power output by using 100 “thin rods” in lieu of the optical fibers. This would reduce the overall energy drain to only 5% of the ISS’s output — a twenty-fold decrease.

This version of the laser system would allow the ISS to fire laser bursts for 10 seconds, up to a range of 10 kilometers (6.2 miles), with a recharge time of 200 seconds, according to Russian media. The whole system would weigh about 500 kilograms (1,100 pounds).

It’s a small price to pay, considering the benefits such a system would provide. The ISS still has to make routine adjustments to its orbit to avoid collisions with pieces of man-made junk. These bits are parts of former rockets or spacecraft that have been broken up into small pieces through mutual collisions over the years, or from the effects of space radiation. 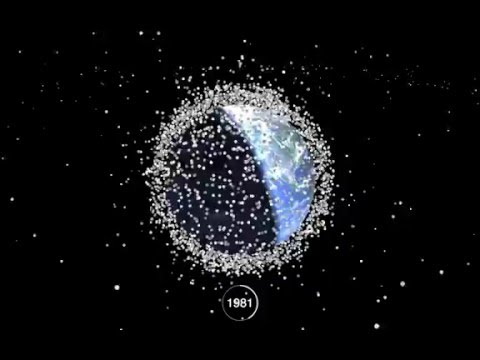 They’re quite small, going very fast, and can have disastrous consequences to the ISS’s structural integrity should they hit. There’s also a lot of them. NASA is currently tracking about 17,000 pieces about the size of your fist and half a million pieces roughly the size of a marble. According to their estimates, there are over 200 million pieces over one millimeter in size still floating in Earth’s orbit at speeds in excess of 17,500 mph (over 28.100 km/h).

An impact with any single one of those fragments could jeopardize the ISS and its crew.