I’m not necessarily a big fan of Ikea, but you have to admire this kind of initiative. The Swedish corporation announced they will go for a sustainable business model, one which features €1.5 billion investments in solar and wind power. 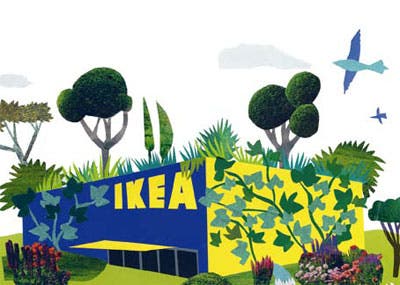 The furniture company has remained true to its initial model, which involved doing things as cheaply and efficiently as possible, while also maintaining the classic Swedish design. Twenty-five years on and it now has outlets in 41 countries, and renewable energy is the next logical step.

The company’s chief executive Mikael Ohlsson said the move was sure to drive innovation in the industry and beyond. The plan is to make 70% of spent energy renewable by 2015 (less than three years from now) and reach total self sufficiency by 2020. The target seems quite achievable, especially considering how the 342,000 solar panels on its outlets and factories already generate more than a quarter of its total energy. Add that to the fact that they have wind farms in six countries across Europe and that they’ve already invested half of the €1.5 billion figure, and it looks like a serious long run strategy.

The company also intends to plant as many trees as it uses for furniture by 2020, selling energy efficient products like induction cookers, using LED lights across the company (which, it says, will cut emissions equal to those produced by the Netherlands), ensuring its other bought-in products are sustainable and helping supply clean water to the areas its factories are based. They have also introduced a new concept called kitchen recycling – and it’s not about waste, it’s about the actual kitchen.

“Some things are best recycled by local authorities,” Ikea’s chief sustainability officer Steve Howard told the Financial Times, “but others, we can help, like kitchens, wardrobes, mattresses. Maybe we could have low-cost leasing of kitchens and see a product offering become a service one. We want a smarter consumption, and maybe people are less attached to ownership”.

Despite numerous controversies, especially related to taxation and forest felling, Ikea seems to set itself as a model for others to follow – if they actually follow through with all their plans.