The king of all predators, the godfather of his time, la creme de la creme – Tyrannosaurus Rex (T. Rex) was the ultimate predator… or was he? When Jurassic Park came out, even though the cinema crowd went wild as T. Rex smashed and ate velociraptors (and the occasional human), at the time, there was no compelling proof that the dinosaur actually hunted – some teams actually claimed that he was a scavenger. 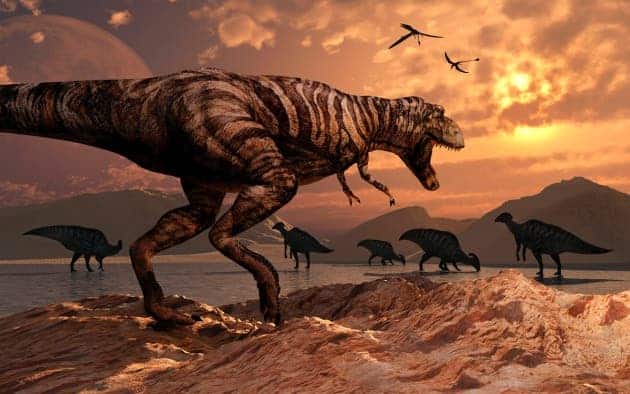 In 2011, a team from the Zoological Society of London reaffirmed T. Rex as the mean green killing machine we all know:

“It is effectively impossible for Tyrannosaurus rex to have fed solely or almost completely on carcasses of dead animals. T. rex lived in an ecosystem with a large number of smaller-bodied carnivorous dinosaur species and it couldn’t have relied on carcasses for its diet,” said Sam Turvey, a co-author of the study published in Proceedings of the Royal Society B.

It seemed obvious that T. Rex was a hunter. But few doubts still remained. Now, another study seems to pin the final nail in the scavenger theory.

The researchers found a T. rex tooth stuck between vertebrae in the tail of a herbivorous duck-billed hadrosaur. The fossils came from a famous area in South Dakota – the Hell Creek Formation.

The finding is very significant because the T. rex tooth is surrounded by bone that clearly grew after the tooth became lodged there. This could only happen if the predator bit the herbivore’s tail, lost its tooth there, as well as the prey.

“It’s a smoking gun. We finally have Tyrannosaurus rex caught in the act,” says Bruce Rothschild, a palaeopathologist at the University of Kansas in Lawrence and a co-author of the paper. “We’ve seen plenty of re-healed bite marks attributed to Tyrannosaurus rex, but it’s hard to confirm identity with those,” says Thomas Holtz, a vertebrate palaeontologist from the University of Maryland in College Park. “Actually having the broken tooth makes it easy to determine who was doing the hunting here,”

But even with this, some are hard to convince.

“I’ve long argued that Tyrannosaurus rex was an opportunist like a hyena, sometimes hunting and sometimes scavenging. This provides no evidence to the contrary,” says Jack Horner, a palaeontologist at the Museum of the Rockies in Bozeman, Montana, who served as scientific adviser on the Jurassic Park films.

But even as a few argue that he wasn’t a pure predator, and more argue that he in fact was, even a larger group is just fed up by this debate.

“Great galloping lizards!” exclaims John Hutchinson, an evolutionary physiologist at the Royal Veterinary College in London. “It is so frustrating to see provocative half-baked ideas about celebrity species like Tyrannosaurus rex drawing the public’s attention when there is so much more interesting palaeontology to be talking about.”