Rare Earth minerals to be mined from the seafloor

by Mihai Andrei
in Geology, Other
A A

The next step in prospecting and mining has always been a subject of speculation and theories, ever since the days of Jules Verne. For decades, an idea that flourished more and more was to gather up potato-sized magnanese nodules, rich in nickel, cobalt and manganese, that are very valuable in large quantities. The problem is that pretty much all the time, they lie miles below the seafloor, which obviously poses some serious technical questions. 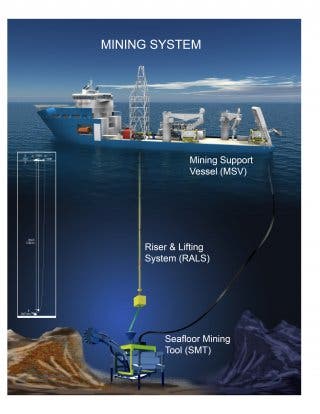 The classical idea of building giant vacuums to suck up the nodules never proved to be economically sustainable; however, it was recently discovered that these modules are have a high content of rare earth minerals, elements that have a high demand rate but have recently reached a production roadblock. China, which controls about 95% of the worldwide quantity had stopped seeling them, creating huge political and industrial alarms; they stopped the embargo a few weeks ago, but the hunt for other sources still continues – this could give the seabed miners quite a few reasons to smile and rub their hands.

“People are quite intrigued,” said James R. Hein, a geologist with the United State Geological Survey who specializes in seabed minerals. Depending on China’s behavior and the global reaction, he said, “rare earths may be the driving force in the near future.”

About a month ago, Dr. Hein and five colleagues from Germany presented a paper on harvesting the nodules for rare and valuable metals, and concluded that there really is something there.

“They really do add value,” Charles L. Morgan, chairman of the institute, said of the rare earths in an interview. The result, he added, is that the nodules have taken on a new luster. “People are starting to think, ‘Well, maybe these things aren’t so dumb after all.’ ”

Rare earths are quite interesting from a number of perspectives; most of them are not really rare at all, but they rarely gather up in large quantities; some of them are practically neglectable. For example, an isotope of Promethium has only 572 g in the entire Earth’s crust. Right now, they really aren’t extremely important, but things could change pretty quick, especially with the current unstable political situation.

“The global activity is tremendous,” said Dr. Hein of geological survey, referring to undersea exploration as well as processing assessments on land. “Right now, rare earths are not the driving force,” he said. “But for copper and nickel, the prices are there.”