Afghanistan sits on $1 trillion worth of mineral deposits. Is this a game changer?

America’s longest war (or second-longest for sure) in history is expected to end in 2014 once with the retreat of US forces from Afghanistan. Currently members of the International Security Assistance Force (ISAF) in Afghanistan are heading for the exits, leaving the US alone in securing the country. That’s not all they leave behind, though. They also leave a war shattered and barren Afghanistan,and  at they same time they leave a country whose resources might skyrocket the country into potential peace and prosperity in a foreseeable future – if, and that’s a really big IF, Afghanistan can settle many of its internal struggles (corruption, civil war, talibal uprisings, education etc.) and fend off foreign corporate interests.

Afghanistan has always been regarded has a very mineral-rich country, however recent surveys reveal that the country is actually home to even more resources than previously thought. For instance, copper, cobalt, iron, barite, sulfur, lead, silver, zinc, niobium abound in the country and, most importantly, some 1.4 million metric tons of rare earth elements (REEs) are believed to be lie beneath Afghan soil. U.S. agencies estimate Afghanistan’s mineral deposits to be worth upwards of $1 trillion and in fact, a classified Pentagon memo called Afghanistan the “Saudi Arabia of lithium.” It’s worth mentioning though that lithium isn’t technically a rare earth mineral, but it falls more or less in the same class since it’s used for the same purposes as REEs.

Rare earth elements are indispensable for today’s modern technology. These resources are indispensable in the manufacturing of essential components that go into televisions, cell phones, batteries, fibers optics, lasers, just about any kind of modern hardware you can think of. This includes military applications as well, which is why US Congress called rare earth elements “critical to national security (*wink). 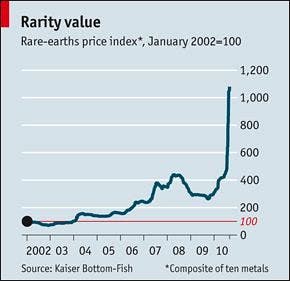 Today, a whooping 97% of all rare earth elements supply is controlled by China! The country took advantage of their strong position, and repeatedly manipulated the market by slowing down, and at times, halting exports all together in some parts of the world, citing pollution prevention. China reached this position not because they control the single largest REEs deposit in the world, but because they thought ahead. Science and technology has evolved at a huge pace in the past few decades, and the Chinese were wise enough to foresee that this would come with a huge demand for REEs. As such they started their mining operations decades before other countries.

China might lose its foothold as the market share of REEs will diversify in the future, with  new REE mines coming online in Australia, Brazil, Canada, Vietnam, even in the US where the first mines could become operational by 2015. Afghanistan with its huge stockpile could join ranks, something that could finally propel the country out of its financial and spiritual misery. On another note, some researchers are exploring the possibilities of synthesizing rare earth elements and are developing rare earth elements recycling methods in order to reduce supply dependency.

It was known that Afghanistan is abundant in a slew of valuable minerals ever since the soviet’s decade long occupation of the region. The extent of their deposits has been refined recently after the country was mapped using what I believe to be a simply staggering display of science and technology: “broad-scale hyper-spectral data”. Basically, this technology allows for a highly precise survey of natural resources on the country level by peering beneath Afghanistan’s “skin” using specialized instruments deployed airborne.

Whether Afghanistan will be capable of taping these resources in the next decade looks rather improbable considering its current political context. Poor infrastructure, a huge degree of illiteracy among the population, civil unrest and more factors are sure to deter investors. However, this doesn’t seem to worry China too much. Keen on keeping its firm grip on REEs, China is eager to develop Afghanistan’s mineral wealth, after the country  won exploration rights for copper, coal, oil, and lithium deposits across Afghanistan.

Stephen Haber and Victor Menaldo, political scientists specializing in the research of mineral booms, liken Afghanistan’s situation to that of Mexico in the XIX century, citing political and economic similarities between the two countries then and now. Around that time oil and other valuable minerals significantly changed Mexico, although the country is still struggling with a number of social problems (high corruption, cartel feuds etc.).

For now, it seems Afghanistan will have to settle being the heroin center of the world, where drug trade is funneling billions into the country. Hopefully, Afghanistan might one day grow stable enough to tap its incredible wealth in resources. In time, one of the poorest countries in the world might become one of the wealthiest. Will this money reach the Afghan independent government and its people? Well, that’s a whole different discussion.