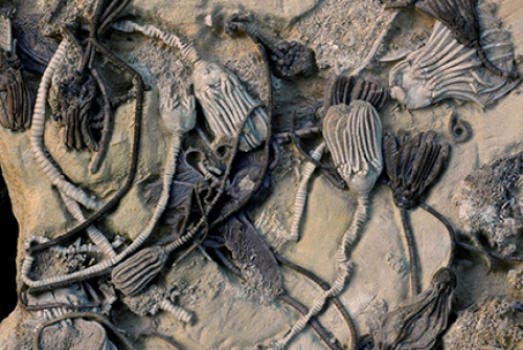 n case are called crinoids, but are probably better known today as “sea lilies”; they are absolutely remarkable creatures, able to survive from shallow waters to depths of up to 6.000 meters. The earliest group of crinoids lived in the Ordovician – some 460 million years ago. The Crinoids found by Ohio State University geologists are a little younger, dating from the Carboniferous – the period when North America was covered with vast inland seas. Typically, these creatures disintegrate fast, even in a few hours, but in some cases, like this one, they are buried quickly and covered with sediment which keeps them together. They are isolated from the water above by a sedimentary layer and their porous skeletons are gradually filled with minerals. What makes this discovery absolutely special is the fact that some of the pores containing organic molecules were sealed intact.

That’s what researchers concluded, at least. William Ausich, professor in the School of Earth Sciences at Ohio State and co-author of the paper, explained why the organic molecules are special:

“There are lots of fragmented biological molecules — we call them biomarkers — scattered in the rock everywhere. They’re the remains of ancient plant and animal life, all broken up and mixed together,” he said. “But this is the oldest example where anyone has found biomarkers inside a particular complete fossil. We can say with confidence that these organic molecules came from the individual animals whose remains we tested.”

Part of why the crinoids are so well preserved also has a lot to do with the location and the structure of their skeletons. In the flat American Midwest, the rocks weren’t pushed up into mountain chains or heated by volcanism – they are pretty much orogenically pristine. Conditions that preserve crinoids over such long periods of time are quite rare due to their skeletal structure.

“We think that rock fills in the skeleton according to how the crystals are oriented. So it’s possible to find large crystals filled in such a way that they have organic matter still trapped inside,” Ausich said.

This opens up a whole new area of paleontological research – directly analyzing organic material. Of course, this is not DNA, and it will never be as good as DNA, but it’s definitely important, and could mark a turning point.

“These molecules are not DNA, and they’ll never be as good as DNA as a means to define evolutionary relationships, but they could still be useful,” Ausich said. “We suspect that there’s some kind of biological signal there — we just need to figure out how specific it is before we can use it as a means to track different species.”