by Mihai Andrei
in Geology, Remote sensing, Space
A A

Typically on Earth, days usually have a temperature maximum somewhere after lunch, and a minimum during the night. But for Mars, things are pretty different: 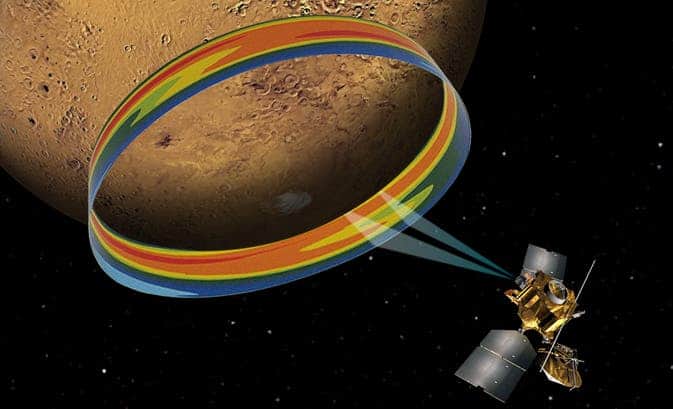 Temperatures swing as much as 32 degrees Celsius (58 Fahrenheit) in this odd, bipolar type of climate – as detected by the orbiter’s Mars Climate Sounder instrument.

“We were surprised to find this strong twice-a-day structure in the temperatures of the non-dusty Mars atmosphere,” Kleinboehl said. “While the diurnal tide as a dominant temperature response to the day-night cycle of solar heating on Mars has been known for decades, the discovery of a persistent semi-diurnal response even outside of major dust storms was quite unexpected, and caused us to wonder what drove this response.”

But why does this happen? Kleinboehl and his team have found the answer in the water-ice clouds of Mars. The Martian atmosphere has water-ice clouds for most of the year. During daytime, equatorial clouds at 10-30 km from the ground absorb infrared light emitted from the surface during daytime. These clouds are very thin, and relatively transparent – this absorbtion is enough to heat the middle atmosphere each day. The observed semi-diurnal temperature pattern, with its maximum temperature swings occurring away from the tropics, was also unexpected, but has been replicated in Mars climate models when the radiative effects of water-ice clouds are included.

“We think of Mars as a cold and dry world with little water, but there is actually more water vapor in the Martian atmosphere than in the upper layers of Earth’s atmosphere,” Kleinboehl said. “Water-ice clouds have been known to form in regions of cold temperatures, but the feedback of these clouds on the Mars temperature structure had not been appreciated. We know now that we will have to consider the cloud structure if we want to understand the Martian atmosphere. This is comparable to scientific studies concerning Earth’s atmosphere, where we have to better understand clouds to estimate their influence on climate.”