Geological maps can be awesome here on Earth, but when we have geological maps of extraterrestrial bodies... that's when we get really excited.

Geological maps can be awesome here on Earth, but when we have geological maps of extraterrestrial bodies… that’s when we get really excited. 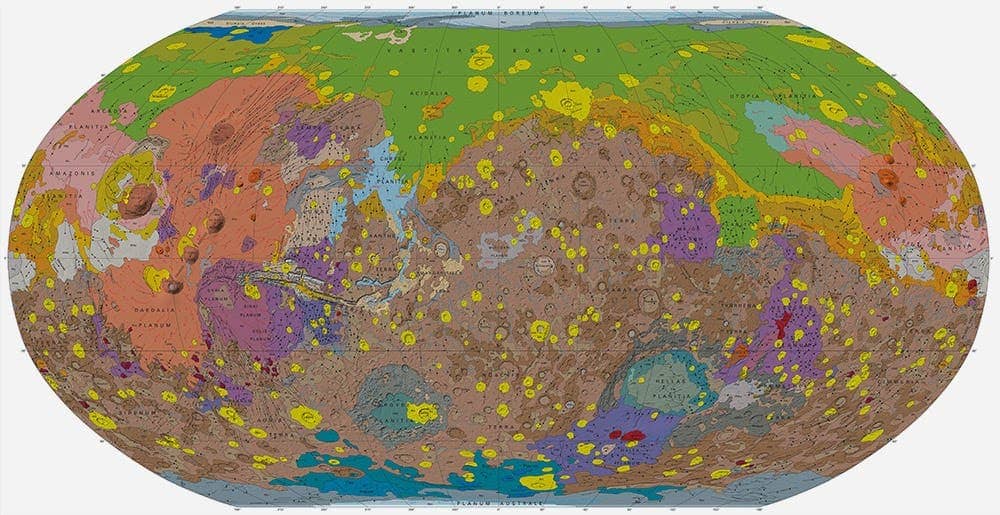 Astrogeology is about as exciting as a science can get, and in recent years, we’ve been spoiled with thrilling announcements, from water on Mars to plate tectonics on Europa to Pluto’s surprising geology. But once in a while, it’s nice to step back, look at all the data you have and put it all together – and what better way to do that than a map?

Humans have been studying the surface and geology of Mars through telescopes for over 400 years, but it was the Mariner 9 mission and the Viking Orbiter missions that first gave us a global view of the Red Planet and enabled us to create the first geological maps outside of the Earth-Moon system.

But things have gotten even better after that, thanks to The Mars Global Surveyor, Mars Odyssey, Mars Express and Mars Reconnaissance Orbiter missions; with a myriad of sensors, they’ve gathered more and more information about the surface of the planet and the characteristics of the minerals that make it.

“These data have provided morphologic, topographic, spectral, thermophysical, radar sounding, and other observations for integration, analysis, and interpretation in support of geologic mapping,” USGS writes. “In particular, the precise topographic mapping now available has enabled consistent morphologic portrayal of the surface for global mapping (whereas previously used visual-range image bases were less effective, because they combined morphologic and albedo information and, locally, atmospheric haze). Also, thermal infrared image bases used for this map tended to be less affected by atmospheric haze and thus are reliable for analysis of surface morphology and texture at even higher resolution than the topographic products.”

The map is one of the several revisions that the USGS is doing, including for two of Jupiter’s moons, Ganymede and Io. If you want to see a (much) higher resolution version, with a color scale and explanations, check out this link.