Many species now going extinct may vanish without a fossil trace

We judge our planet's biological past by using geological evidence - fossils. Fossils are the preserved remains or traces of animals, plants, and other organisms from the remote past.

We judge our planet’s biological past by using geological evidence – fossils. Fossils are the preserved remains or traces of animals, plants, and other organisms from the remote past. But not organisms form fossils, and not all fossils are preserved. Now, a new study found that many species might be vanishing without a trace, and this could make geologists underestimate previous extinctions and disruptive events. 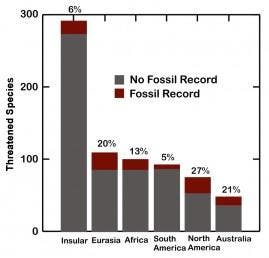 Roy Plotnick, professor of earth and environmental sciences at the University of Illinois at Chicago and two colleagues analyzed the “Red List” of endangered species, comparing it to the existing fossil record for those species. Surprisingly, they found that more than 85 percent of the mammal species at high risk of extinction lack a fossil record! In other words, previous extinctions may have been much more dramatic, but the evidence has since washed away.

Animals least likely to be found as fossils are “the small, cute and fuzzy ones, like rodents and bats,” Plotnick said. “Body size is an obvious factor — bigger things tend to leave a fossil record, as do things with larger geographical ranges.”

In order for fossils to form, empty spaces within an organism (spaces filled with liquid or gas during life) become filled with mineral-rich groundwater. Minerals precipitate from the groundwater, occupying the empty spaces. Another fossilization phenomenon is casting – when the remains of a creature create an external or internal mold around them. Needless to say, both these processes take specific conditions, and these conditions aren’t always satisfied. In fact, they are apparently very rarely satisfied. This is also the reason why it’s so hard to find some key fossils, especially of the so-called missing links – because they might have simply not left any fossils behind (or very few).

Some species are forever gone, without us ever having the possibility of learning about them – and this process may be going on today.

“There are species going extinct today that have never been described,” Plotnick said. “Others are going extinct that are known only because someone wrote it down.” All such species would thus be unknown in the far future, he said, if the written historical record is lost — as it might well be.

This also raises a question about information preservation. The fossil record, Plotnick points out, is much more durable than any human record. When all else is gone, fossils will still be there, he argues.

“As humanity has evolved, our methods of recording information have become ever more ephemeral,” he said. “Clay tablets last longer than books. And who today can read an 8-inch floppy?” he shrugged. “If we put everything on electronic media, will those records exist in a million years? The fossils will.”