Finding mosquitoes trapped in amber is truly exciting, but it’s not really unique – there have been several reported cases all around the world, and some people are even selling such samples (which I don’t think is a good thing, but that’s another discussion). But finding a fossilized mosquito in sediment… now that’s unique! It took a series of highly improbable events and a bit of luck for paleontologists to find this insect trapped in 46 million years old sedimentary rocks (dating from the the Eocene). But even more exciting, the mosquito still carries in its belly the blood from its last meal. 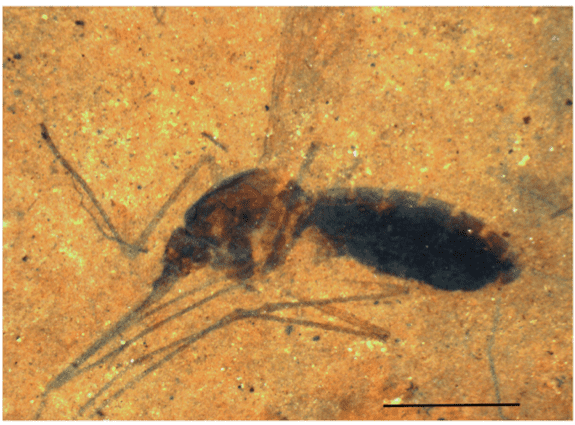 The unique preservation of this well-fed mosquito is almost certainly bound to a pond or other lake-like environment.

“The insect had to take a blood meal, be blown to the water’s surface, and sink to the bottom of a pond or similar lacustrine [lake-like] structure to be quickly embedded in fine anaerobic sediment,” they write, “all without disruption of its fragile distended blood-filled abdomen.”

The result, discovered in a shale in Montana is the first fossil of a mosquito found still engorged with ancient blood. According to the study’s leader, Smithsonian Institution paleontologist Dale Greenwalt, this is only the fifth instance of blood-eating (hematophagy) fossilized ever found. Most likely candidates for such findings are midges, a kind of biting fly, which usually lived near lakes; mosquitoes, which typically prefer open air spaces, are less likely to be found in such a state. In addition, contrary to popular belief, most mosquitoes don’t really eat blood (most of them are pollinators), and even of those who do, it’s only the females which bite.

But don’t get your hopes up – whatever the mosquito bit, we won’t be able to find out. DNA molecules in blood couldn’t withstand fossilization; and if you were thinking dinosaurs, you’re way off the mark. This mosquito lived in the Eocene, some 19 million years after non-avian dinosaurs went extinct.

The results were published in the Proceedings of the National Academy of Sciences.