Fossilized moth wings, that are blue after death were yellow-green during lifetime, suggesting a colorful and creative method of camouflage. 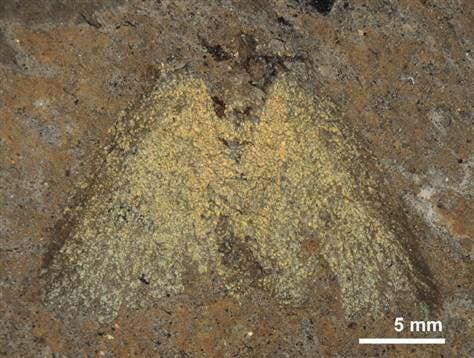 The moths lived in a difficult period, some 47 million years ago, in a period where life was still trying to fill the gaps left behind by the major dinosaur extinction; they used their colors to blend in with leaves while nesting, according to Maria McNamara, a paleobiologist and postdoctoral researcher at Yale University. But considering that today, green butterflies contain extremely toxic cyanide, to warn off predators, so the moths might have used this too.

“They were probably using the color for the same kind of function,” McNamara declared, “to hide themselves when they were resting, but as a warning signal when they were feeding.”

McNamara and her colleagues are looking for what is called structural colors: not those produced by pigments, but those produced by the organism’s tissues. They were ‘browsing’ through some fossils found in Germany, when they came across several moth species, all belonging to a group called lepidopterans, which also includes butterflies. The fossils were preserved extremely well – up to the point where researchers can study the tiny, featherlike scales on the ancient moths’ wings that held the key to their structural color.

“When you look at these fossils today in air, their wings look a blue-green color,” McNamara said. “But we were able to work out that originally, their wings were more of a yellow-green color.”

A small step for humans, a big leap for moths

This might not seem like a major find, but it offers an significant amount about them, and it also puts into context a relevant part of an ecosystem. For starters, the fact that they had colors at all reveals that they were daytime creatures, unlike most moths today, which hang around nighttime. The color wasn’t iridescent, which means that it looked absolutely the same from any angle (unlike that of some beetles), which indicates that it was probably used for camouflage, as well as warning.

“You might be able to reconstruct colors of other butterfly and fossil moths that just look brown today,” she said. “It’s part of the whole process of working out what animals have used colors for in the past.”

The results will be published this Tuesday in PLoS Biology