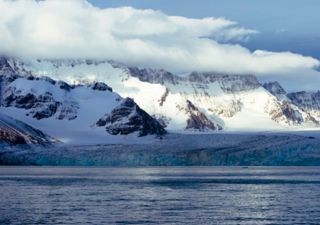 A volcano in the West Antarctic Ice Sheet erupted 2000 years ago (325BC) and remains active thus giving us the first evidence of an under-ice volcanic eruption. This volcano has a volcanic explosion index of about 3-4. The heat from the volcano melt-water that lubricates the base of the ice sheet and increases the flow towards the sea. The volcano is located beneath the West Antarctic ice sheet in the Hudson Mountains at latitude 74.6°South, longitude 97°West. Volcanoes are a very important part of the region eruptions were quite common in the past 25 million years, and coincided with the great period of climatic deterioration that resulted in the formation of the Antarctic ice sheet.

The paper ‘A recent volcanic eruption beneath the West Antarctic ice sheet‘ by Hugh F Corr and David G Vaughan (which are members of the British Antarctic Survey) is published in the February edition of Nature Geosciences (online). Lead author Hugh Corr of the BAS says:

“The discovery of a ‘subglacial’ volcanic eruption from beneath the Antarctic ice sheet is unique in itself. But our techniques also allow us to put a date on the eruption, determine how powerful it was and map out the area where ash fell. We believe this was the biggest eruption in Antarctica during the last 10,000 years. It blew a substantial hole in the ice sheet, and generated a plume of ash and gas that rose around 12 km into air.”

This discovery will help determine the future of the West Antarctic Ice Sheet and make predictions about rising sea levels more accurate. Many of the volcanoes show signs of interaction with ice and it is very important to understand these effects in order to predict future configurations of the ice sheet and also the role it plays for the entire globe.

“This eruption occurred close to Pine Island Glacier on the West Antarctic Ice Sheet. The flow of this glacier towards the coast has speeded up in recent decades and it may be possible that heat from the volcano has caused some of that acceleration. However, it cannot explain the more widespread thinning of West Antarctic glaciers that together are contributing nearly 0.2mm per year to sea-level rise. This wider change most probably has its origin in warming ocean waters.”

Hopefully predictions are going to be more accurate from this point on.