Dinosaurs were as warm blooded as today’s mammals

Were dinosaurs slow and lazy, as you see most reptiles today, or active and quick like you see them in the movies? It pretty much depends on their body temperature – if they are cold blooded or not.

The kingdom of T-Rex 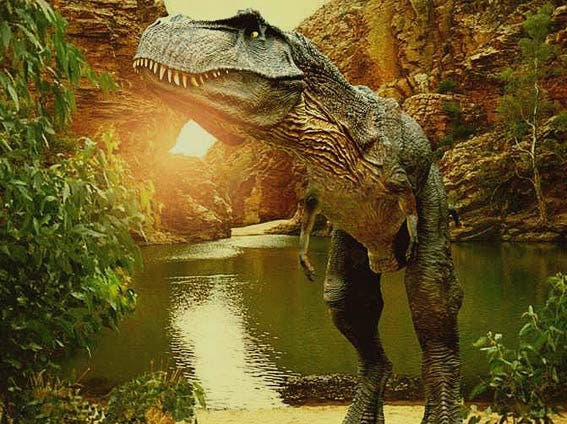 It seemed to be a no-brainer that dinosaurs are cold blooded, relying on a very warm environment to survive, and active only a few hours a day. However, more recent research conducted in the past few decades seems to suggest that dinosaurs were much more nimble, like the velociraptor, or even downright fast – like T-Rex. Such feats would require a blood temperature close to that of today’s mammals.

Dinosaurs were an incredibly diverse group of animals that ruled the Earth for some 160 million years, until the great extinction that took place 65 million years ago; considering the fact that we’ve started imposing ourselves as a species some 50.000 years ago, that’s definitely something worth thinking about.

It’s pretty amazing to see how many things you can find out about creatures that lived 100 million years ago, if you use modern science and a creative approach. CalTech researchers did just this, analyzing isotopic concentrations in teeth of sauropods, dinosaurs believed to be the biggest land animals to have ever lived, with huge long necks, the team found that the body temperature of dinosaurs was similar to that of modern day animals.

“This is like being able to stick a thermometer in an animal that has been extinct for 150 million years,” says Robert Eagle, a postdoctoral scholar at Caltech and lead author on the paper to be published online in the June 23 issue of Science Express.

If their analysis is correct, it’s indeed groundbreaking, shattering a general consensus that measuring dinosaur body temperatures would be impossible.

“The consensus was that no one would ever measure dinosaur body temperatures, that it’s impossible to do,” says John Eiler, a coauthor and the Robert P. Sharp Professor of Geology and professor of geochemistry. And yet, using a technique pioneered in Eiler’s lab, the team did just that

The team analyzed 11 teeth, coming from different parts of the world, including Tanzania and Wyoming, belonging to Brachiosaurus brancai and Camarasaurus. They found that the Brachiosaurus had a temperature of about 38.2 degrees Celsius (100.8 degrees Fahrenheit) and the Camarasaurus had one of about 35.7 degrees Celsius (96.3 degrees Fahrenheit). This is pretty close to human body temperature (36.8 degrees Celsius), warmer than crocodiles and aligators and cooler than birds.

“Nobody has used this approach to look at dinosaur body temperatures before, so our study provides a completely different angle on the longstanding debate about dinosaur physiology,” Eagle says.

Isolated cases, or a general rule ?

The research seems to indicate quite clearly that dinosaurs were warm blooded, thus indicating a warm blooded metabolism, but the issue itself is much more complex. Because sauropods were so huge, they could retain body heat much more efficiently than humans or smaller reptiles.

“If you’re an animal that you can approximate as a sphere of meat the size of a room, you can’t be cold unless you’re dead,” Eiler explains.

So even if you depend on your environment’s heat to survive (which is what reptiles and lizards do), it is still possible to have warm blood.

“The body temperatures we’ve estimated now provide a key piece of data that any model of dinosaur physiology has to be able to explain,” says Aradhna Tripati, a coauthor who’s an assistant professor at UCLA and visiting researcher in geochemistry at Caltech. “As a result, the data can help scientists test physiological models to explain how these organisms lived.”

There are also other matters to take into consideration, mainly the theory of gigantotherms, which implies that dinosaurs maintained high body temperatures simply by being so big, and that they even had to have some cooling mechanism, to prevent them from becoming too hot. They would probably have had lower metabolic rates to reduce the amount of internal heat, especially as large adults. But still, the method is revolutionary, and can be applied to virtually any species, so we will definitely be getting more results for more, smaller species of dinosaurs.

“What we’re doing is special in that it’s thermodynamically based,” Eiler explains. “Thermodynamics, like the laws of gravity, is independent of setting, time, and context.” Because thermodynamics worked the same way 150 million years ago as it does today, measuring isotope clumping is an extrem powerful technique, that can be applied for any setting.