Anomalocaridids were extremely weird animals, by today’s standards; but by the standards of the Cambrian, they were the hot guys. They had a long spiny head, powerful limbs which were probably used to snag prey and a series of blade-like filaments in segments across the animal’s back, which could have functioned as gills. 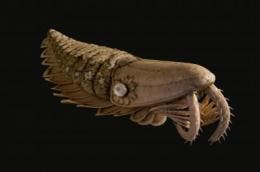 During the Cambrian period, there was a major “explosion” of life, facilitating the appearance of numerous species, some of which are nothing short of amazing. Anomalocaridids were the biggest among them, some 500-540 million years ago; but don’t think about dinosaurs – fossils suggest they were 2, maybe 3 feet long. Until now, paleontologists believed that these animals died out at the end of the Cambrian, during the great extinction.

Now, a team led by former Yale researcher Peter Van Roy (now at Ghent University in Belgium) and Derek Briggs, director of the Yale Peabody Museum of Natural History, has discovered a giant fossilized anomalocaridid that measures one meter (more than three feet) in length. In addition, the creature dates back to the Ordovician period – the geological period that followed the Cambrian.

“The anomalocaridids are one of the most iconic groups of Cambrian animals,” Briggs said. “These giant invertebrate predators and scavengers have come to symbolize the unfamiliar morphologies displayed by organisms that branched off early from lineages leading to modern marine animals, and then went extinct. Now we know that they died out much more recently than we thought.”

Of course, the result is not only that the species itself lived, but that it also influenced numerous other specimens from a variety of ecosystems.

“The new discoveries in Morocco indicate that animals characteristic of the Cambrian, such as the anomalocaridids, continued to have a considerable impact on the biodiversity and ecology of marine communities many millions of years later,” Van Roy said.