An extremely old spider has showed its face for the first time in almost 50 million years; buried in a large chunk of amber, this Huntsman spider has descendants which live in the tropics and Southern Europe today. They can grow up to 30 centimeters, but they’re not aggressive and not poisonous for humans, despite the fact that they deliver quite a bite.

This fossil, housed in the Berlin natural history musem is much smaller, and only through a technique called X-ray computed tomography were researchers able to make this 3D portrait of it.

“The research is particularly exciting because our results show that this method works and that other scientifically important specimens in historical pieces of darkened amber can be investigated and compared to their living relatives in the same way,” study researcher David Penney of the University of Manchester said in a statement.

Indeed, the obtained images are spectacular, revealing fangs, eyes and “pedipalps,” or the feelers on the spider’s face. They even made a video, showing the results of the procedure. I highly recommend watching it, that is, if you’re not afraid of going through the fangs of a 49 million year old spider. 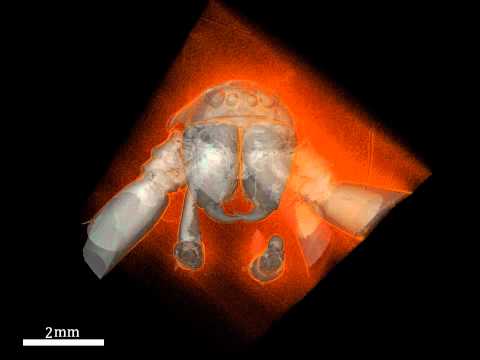