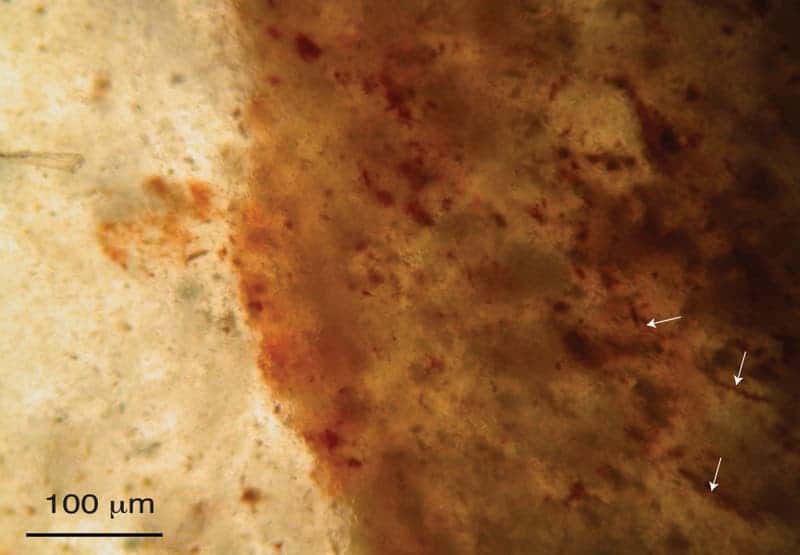 It is generally believed, and taught in paleontology courses that the oldest evidence of life on Earth is 3.5 billion years old, and was found in Australia, thanks to some bacterial fossils. However, geologists from the University of Texas conducted a study that concluded that the tiny gaps in the Australian chert are nothing more than… gaps; surrounded by bits of hematite. This reexamination was published in Nature Geoscience, one of the leading peer reviewed journals in the field.

“We found no sign of any microfossil,” said Alison Olcott Marshall, assistant professor of geology at KU. “What we found were minerals that took the appearance of life. We went into this assuming these were microfossils — as was pretty well accepted in the scientific community. It was a good lesson in trusting your data over what you’d been told you should find. At every step of the way, we would do an experiment expecting to find one result and find the complete opposite instead.”

That’s the great thing about science, it can always surprise !

“I went to the outcrop and with a geological pick I proceeded to break into the rock,” Craig Marshall, assistant professor of geology at KU said. “These rocks are very difficult to sample, they’re not crumbly like limestone. You’ve got to really put your shoulder into it. I sampled from the microfossil locality, but I also sampled at 10-meter intervals, tracing up the formation.”

They did everything like previous studies, except for one thing: they created a set of much thinner sample sections, that allowed much light to pass through the rock. They analized it with a traditional microscope, then moved to the heavy stuff: the most complex Renishaw Raman spectrometer dedicated to paleontology in the United States, housed at KU’s Multidisciplinary Research Building. Armed in this way, they set on to thoroughly study the samples, and where others found carbon-like materials, an indicator of life, they found hematite, a mineral formed from oxygen and iron, bonded together.

“Bacteria are basically little bags of goo, and they’re not easily fossilized,” said Alison Olcott Marshall. “The idea that you would have this tiny bacterium preserved for 3.5 billion years is not very likely to happen. The second problem is that they are morphologically so simple — they’re just circles and rods. There are lots of things in nature that make circles and rods.”

This could be very important in searching for life on other planets, particularly Mars.

“This work has direct implications for looking for life on Mars,” said Craig Marshall. “If we’re having problems here with ancient Earth sediments and there’s a huge debate, we want to try and be more stringent with our analytic techniques. We don’t want a repeat of the announcement in 1996 that, ‘Wow, we found life on Mars.’ I can’t recall the timeframe of how many days or weeks until they said, ‘Well, maybe we haven’t.’ If we tighten up our ways of looking for ancient biology, this is going to be very applicable for Mars, particularly the ExoMars European mission in 2018 that will take on board a Raman spectrometer.”