A chance discovery revealed an impressive cluster of extinct volcanoes 150 miles off the coast of Sydney, three miles below the water surface. The four volcanoes, which are now calderas, may reveal why Australia and New Zealand separated between 40 and 80 million years ago. 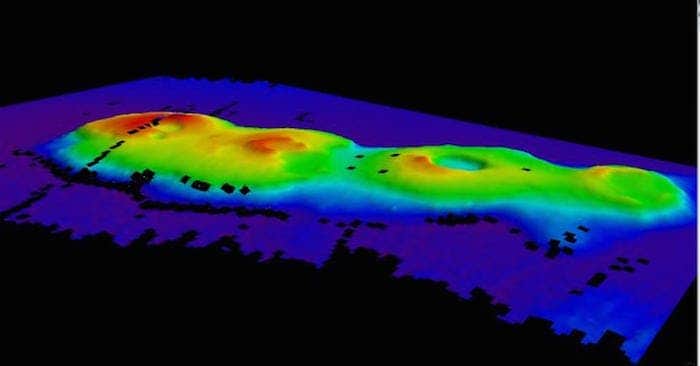 Don’t you just hate it when you go searching for lobsters and you stumble upon massive, extinct volcanoes? Researchers on board a new vessel were hunting for a lobster nursing ground. Not only did they find a surprising breeding ground and map the seafloor, but they also found these volcanoes. Chief scientist Iain Suthers, a marine biologist and professor at UNSW Australia called the mission “enormously successful”.

“Not only did we discover a cluster of volcanoes on Sydney’s doorstep, we were amazed to find that an eddy off Sydney was a hotspot for lobster larvae at a time of the year when we were not expecting them.”

He also expressed admiration for this geological phenomenon, praising it like “something off the front cover of a geology text book”.

“If you could drain the ocean it would be magnificent to see for a few seconds – it’s a remarkable structure,” Professor Iain Suthers told the Australian Broadcasting Corporation.

However, it’s not like they weren’t prepared for any geological discoveries. Volcano expert Professor Richard Arculus from the Australian National University, an igneous petrologist  was also involved in the study, and he believes there is a strong significance to this discovery, potentially offering valuable information about the tectonic evolution of Australia and New Zealand. He said:

“[We are] learning more about the past of Australia and New Zealand and the nature of the stuff below the crust of the earth. It proves yet again that we know more about the topography of Mars than we do the seabed in our own backyard. It could provide information about why the east of Australia stands high, and about mineral deposits, which always drives curiosity.”

This discovery wouldn’t have even been possible without the advanced sonar capabilities of the research vessel. The government’s previous research vessel could only map the sea floor to a depth of about 9 000ft, leaving much of Australia’s oceans uncovered – this one goes much deeper though. The ship can also “send and receive data while we’re at sea, which meant the team back on base at UNSW in Sydney could analyze the information we were collecting at sea and send back their analysis, along with satellite imagery, so we could chase the eddies as they formed.”

“This is the first time we’ve been able to respond directly to the changing dynamics of the ocean and, for a biological oceanographer like me, it doesn’t get more thrilling,” he added. “It was astounding to find juvenile commercial fish species like bream and tailor 150 kilometers offshore, as we had thought that once they were swept out to sea that was end of them. But in fact these eddies are nursery grounds along the east coast of Australia.”

Again, these are not active volcanoes and there’s no chance of them erupting.