by Tibi Puiu
in Geology
A A

Some 200 million years ago  half of all life on Earth went extinct, thus providing a window of opportunity for the dinosaurs to evolve in now unoccupied niches and dominate the planet for the next 135 million years. Curiously enough, after the dinosaurs were at their own term wiped out by a calamity – presumably at the hand of an asteroid impact – our own genus, the mammals, rose up and filled the gaps. Recognize a pattern here? 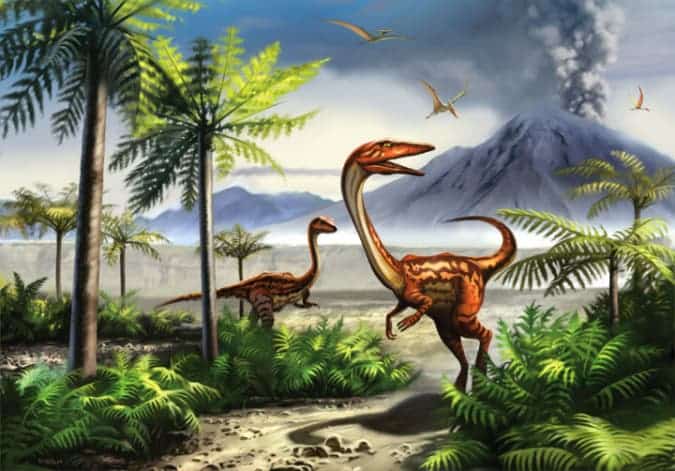 Anyway, let’s head back to a time when dinosaurs were yet to become the dominant species on Earth, in the End-Triassic, some 200 million years ago. During this time a massive extinction known as the End-Triassic Extinction (ETE) brought doom upon more than half of all life in the world. A new study from a team of geologists links the abrupt disappearance of approximately half of Earth’s species to a series of massive volcanic cataclysms that took place roughly at the same time.

“This may not quench all the questions about the exact mechanism of the extinction itself.” said the study’s coauthor Paul Olson, a geologist at Columbia University’s Lamont-Doherty Earth Observatory. “However, the coincidence in time with the volcanism is pretty much ironclad.”

Did the extinction come after the volcanic cataclysm or did the volcanic cataclysm come after extinction? Common sense dictates that you’d need a global cataclysm to occur first in order to cause such a widespread extinction, but science isn’t about what seems reasonable, but about what you can prove. For years scientists  have suggested that the ETE and at least four other known past extinctions were caused in part by mega-volcanism and the resulting climate change, however previous studies have been unable to prove this.

The team of international researchers analyzed rock samples in Nova Scotia, Morocco, and even the suburbs of New York City and  used the decay of uranium isotopes to pull exact dates from basalt, a rock known to been left by eruptions. Around the time of the ETE, the supercontinent known as Pangaea began to break apart, and as such a series of massive eruptions around the world that lasted for 600,000 years created a rift that ultimately became the Atlantic Ocean.

Previous studies were obstructed from making a sound correlation between the Triassic mass extinction and the volcanic events from around the same time since errors in calculating the eruptions’ timing ranged between one to three million year. After analyzing a key mineral called zircon — found in igneous rocks such as basalt — scientists were able to narrow down their margin of error to 20,000 to 30,000 years, or slightly before the mass extinction event.

“Zircon is a perfect time capsule for dating those rocks,” said Blackburn. “When the mineral crystallizes, it incorporates uranium, which decays over a known time with respect to the element lead. By measuring the ratio of uranium to lead in our samples, we can determine the age of those crystals.”

Findings were published in the journal Science.