The small yet pleasant city of Bugarach in southwest France is flooded with tourists, but the thing is most of them are preoccupied by UFOs instead of the local countryside. 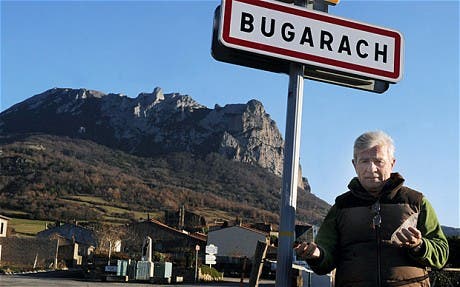 The town located near the Pic of Bugarach mountain which has no more than 200 inhabitants is getting more and more spotlight from doomsday visitors after it became the center of a few odd predictions, including one that prophesies that aliens will arrive on Earth at the mountain on the so-called doomsday.

Jean-Pierre Delord, the town mayor, has become uneasy with the influx of visitors – and for good reasons, when you consider that the number of visitors is expected to increase dramatically as we get nearer to 21th December, which is the date many conspiracy theorists have announced as the end of the world.

“These blasted prophets from all over the world have turned our mountain into some sort of UFO garage,” Delord, who has asked the French army for help, told Reuters last year. “The end result is that all these fanatics are coming here to hide out.”

Another worrying matter is that, as ‘doomsday groups’ start congregating, a number of other dangers could emerge, including riots or mass suicides. Again, sadly, I find myself forced to say that despite what conspiracy theorists or doomsday fans might claim, the world will not end as the Maya predicted, from what we know there is no big planet on a collision course with Earth, and so far, the biggest chance of ending the world is in our own hands.