Exxon CEO: ‘What Good Is It To Save The Planet If Humanity Suffers?’

“Eat, drink, and be merry for tomorrow we die” – seems to be the motto at big oil companies. At Wednesday’s meeting for ExxonMobil shareholders in Dallas, CEO Rex Tillerson told participants that the economy is currently relying on oil, and that will not change anytime soon. He concluded that cutting down on carbon emissions would do no good.

“What good is it to save the planet if humanity suffers?” 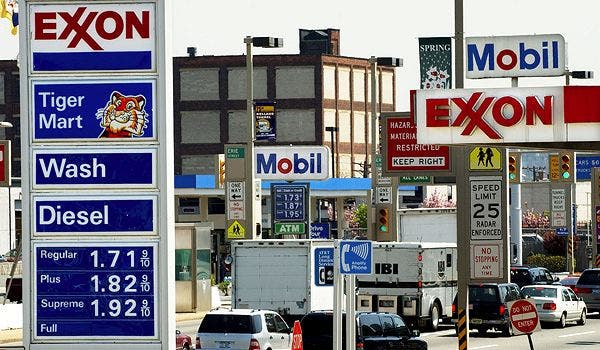 Well, I think I have a good answer: how about the survival of the human species as we know it – avoiding a change of climate which will lead to the death of millions? It’s pretty weird that Tillerson, who is an Eagle Scout (the highest attainable rank in the boy scouts), missed all the rampant ecological destruction that caused the loss of thousands of lives, billions of dollars, and displaced millions of people. Maybe the drought that threatens to cause a global water shortage in just a few decades – and that is if carbon emissions remain the same, and not increase (which they are, at the moment).

Exxon does not see carbon emissions falling until 2040. If this is the case, we’re in for heat waves, drought, water shortage, food insecurity, storms, sea level rises, and so much more! As a matter of fact, they’re so adamant on not seeing carbon emissions drop that they’re funding research to deny climate change. No, really! 9 out of 10 climate denial studies are funded by Exxon Mobil.

“ExxonMobil noted that the company’s ‘operations around the world include remote and offshore areas that present challenges from existing climate extremes and storms. These severe weather events may disrupt supplies or interrupt the operations of ExxonMobil facilities.’ ”

So, as Think Progress puts it, what mister Tillerson probably wanted to say is

“What good is it to save humanity if profits suffer?”

Why is Exxon doing this? Because, of course, it’s a win-win situation. For now, they get to sell all the oil and hydrocarbon products, and as the resource go scarcer and scarcer, they get to sell more unconventional resources (ahem, shale gas); and to add even more to the pie, as climate conditions get more dramatic, they will have other engineering solutions to sell.

”As a species that’s why we’re all still here: we have spent our entire existence adapting. So we will adapt to this. It’s an engineering problem, and it has engineering solutions.”