All work and no food would make the colonists very sad. Also very, very dead.

by Alexandru Micu
in Agriculture, News, Science, Space
A A

We may not be on Mars yet, but new research has made sure that when we get there, we’ll know exactly where to settle.

What would life be without food? Well, for starters, really short; but also quite unpleasant. Precisely because of that, colonists going to Mars in the future will need to settle in a place that’s good for agriculture — as good as can be, on a planet with almost no atmosphere.

To their aid comes a study from the Wageningen University & Research, which has identified the areas on Mars which are favorable for the growing of plants. Even though the crops will be grown indoors, local factors still play a part — chief among them being the presence of regolith and ice deposits, both of which will be used to sustain the crops.

In order to estimate which areas of the planet would be most suitable, the team combined data on Martian geography and geology to create a 3D, Mars-wide landing map, showcasing the best spots for agriculture. The datasets included information about mineral content — relating to calcium and heavy metal content in the soils, for example. Other important element ‘maps’ were those for potassium, chloride, iron, and silicon. The team also mixed in data pertaining to climate, terrain altitude, and radiation exposure.

That’s a lot of data, and several scientific bodies — including the JPL, the Arizona State University, and NASA — pitched in.

“Without them this endeavour would not have been possible”, says Wieger Wamelink, one of the two researchers who created the map.

That’s because each of these elements has a hand to play in the suitability of each area for agriculture. They needed all this data to control for as many factors as possible — and any missing piece could have drastically reduced the work’s applicability. All the maps were merged and, based on the data each contained, were used to calculate a ‘score’ for every area — with high scores marking the best sites, just like in a video game. 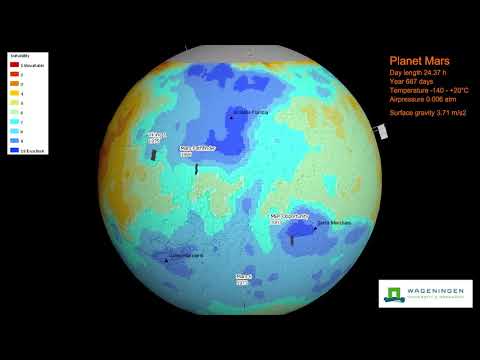 Some factors, naturally, were more decisive than others:

“High levels of heavy metals in the soil and strong radiation make a location unsuitable for establishment,” explains Line Schug.

The map revealed that the Mars Pathfinder and Viking 1 landed at ‘hotspots’ for colonies, while the MSL Curiosity and Viking 2 crafts landed on less favorable spots.

The research is part of the larger “Food for Mars and Moon” project unrolling at Wageningen. It aims to develop a sustainable agricultural system that we can take with us to space. The most important element it relies on is the presence of soils and water, both on Mars and the moon.

The first experiments in the project started in 2013. Researchers used soil simulats supplied by NASA — from a volcano in Hawaii (Mars) and a desert in Arizona (moon) — to try and grow crops. At first, the results weren’t very encouraging. But today the team can grow over a dozen crops. The only species that has stubbornly refused to take the plunge to space-soils is spinach. Chemical analysis showed that the plants are safe for human consumption, but there were fears that the plants would accumulate heavy metals more readily than in Earth soils — that’s why this factor was given more importance when creating the agricultural potential map of Mars.

After they were tested, the veggies were cooked and served to those who supported the project via its crowdfunding campaign. I imagine the attendees considered the food to be “stellar” and “out of this world”.