What makes indian food so unique – a molecular explanation

After they analyzed more than 2,000 traditional Indian recipes down to the molecular levels, scientists now think they know what makes Indian cuisine so appealing. Unlike western dishes, Indian recipes are based on ingredients whose flavors don't overlap for a unique taste that dumbstrucks anyone who tries it for the first time.

After they analyzed more than 2,000 traditional Indian recipes down to the molecular levels, scientists now think they know what makes Indian cuisine so appealing. Unlike western dishes, Indian recipes are based on ingredients whose flavors don’t overlap, for a unique taste that dumbstrucks anyone who tries it for the first time.

Many who try Indian food never look back, and it’s easy to understand why. It’s seductively delicious because of a unique approach to flavoring. On average, a traditional Indian dish has at least seven ingredients that often have various flavors and/or spicings that are heterogeneously combined, so that each bite or mouthful can reveal different combinations of flavor elements that burst upon the tongue at different times in the chewing process.

Let’s take a moment to understand how flavors work their magic, first. Flavor is a sensory impression the brain registers when our chemical sensors (taste and smell) interact with substances (food). Of the chemical senses, by far the most important is smell. Taste is limited to sweet, sour, bitter, salty, umami, and fat since most recently. As previously reported the odors of food can be limitless in combinations, though. To make food taste interesting or avoid making it taste awful, chefs advise you use ingredients which have the right amount of flavor compounds (specific chemicals) in common. Chocolate and blue cheese might sound like a bad idea, but if mixed well to share the optimum amount of flavor compounds, it’ll taste great.

On average, there are just over 50 flavor compounds in each food ingredient and this interactive chart made by Scientific American will show you which ingredients mix well together, according to Western cuisine by overlapping flavors. Roasted beef works good with coffee or caviar. In fact, roasted beef seems to work well with anything. Asian cooking,however, is different – it works with congruous ingredients.

Researchers at the Indian Institute for Technology in Jodhpur scrapped thousands of recipes from a popular website, broke each to its constituent ingredients, then by flavors for each item. They found that rarely do the dishes share common flavors. Here’s an example for a random recipe.

Each ingredient has its own flavor makeup which can be dozens in number. Coconut and onions don’t mix, as we all know, but some chemicals inside do.

So any two ingredients can pair up. 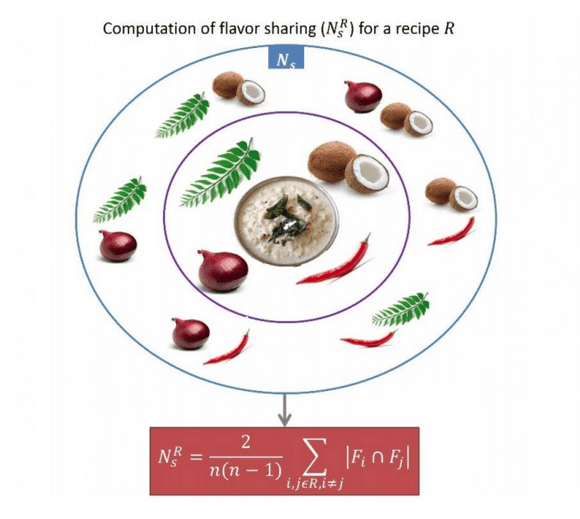 Ultimately, some 200 ingredients were mapped in their database. What they found is that  Indian cuisine tended to mix ingredients whose flavors don’t overlap at all.

“We found that average flavor sharing in Indian cuisine was significantly lesser than expected,” the researchers wrote in Nature.

What’s interesting is that this trend is intensified when certain spices are used. A prime example is  cayenne, a basis for curry. When cayenne is added to dishes, the researchers found that these are likely to use ingredients with less flavors in common. In similar vein are green bell pepper, coriander and garam masala.

So, what you might want to do next time you’re making dinner is be a bit creative. Don’t get sidetracked by seemingly incongrous ingredients. Work it out. Who knows what you’ll invent. And don’t be afraid of curry. Bon Appétit!