Chemists have confirmed the existence of new bond - a vibrational chemical bond. First predicted to occur 30 years ago, the findings yet again show what a complex and constantly evolving field chemistry is.

by Tibi Puiu
in Chemistry, News
Reading Time: 3 mins read
A A
Share on FacebookShare on TwitterSubmit to Reddit

Chemists have confirmed the existence of new bond – a vibrational chemical bond.  First predicted to occur 30 years ago, the findings yet again show what a complex and constantly evolving field chemistry is.

In 1989, Donald Fleming and colleagues were working with a nuclear accelerator in Vancouver when they observed something quite peculiar. One basic tenant of thermodynamics in chemistry is that the rate of a reaction increases with temperature, but when bromine and muonium (a complex atom) were put together, the reaction slowed when the temperature was increased. What was going on there? At the time, Fleming proposed that the bromine and muonium formed an intermediate structure held together by a vibrational bond – an idea put forward as theoretically possible a decade earlier. The model posits that the lightweight muonium atom would move rapidly between two heavy bromine atoms, “like a Ping Pong ball bouncing between two bowling balls,” Fleming says. It’s this oscillation that reduces the overall energy of reaction and slows it down, or the theory goes.

Because there wasn’t any technology available that could image a milisecond reaction of this kind, Fleming shelved the idea. Now, many years later, Fleming and his colleagues ran their reaction again in the nuclear accelerator at Rutherford Appleton Laboratory in England. Again, the reaction slowed with rising temperature, only this time the team was ready for it. Data from both experiments and new imaging techniques showed that muonium and bromine were indeed forming a new type of temporary bond. 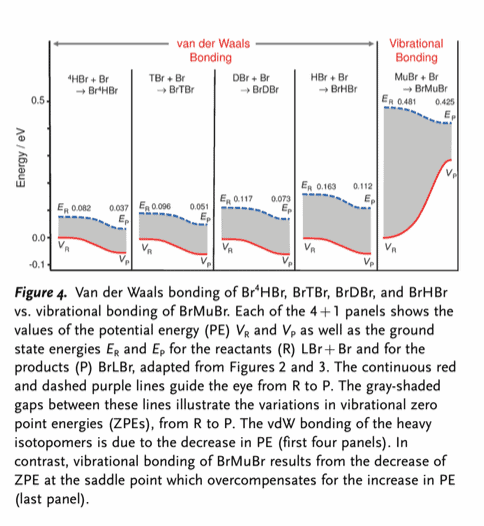 Reddit user AlchemyPhoenix outlines why the above diagram is key to explaining what makes this reaction special:

Notice the blue dashed lines curving downward in every case? These are the total final energy states of the systems as they move from reactants to products. The bond would not form if any of these curved upward. However, what makes the fourth one special, the case with Mu, is that the actual potential energy wells of the products (red curves) is higher than that of the reactants. The reason that this type of bond forms is because the product species themselves sit lower within their respective potential energy wells.We both want to get down to where the water is, so you dig a 30 foot well, but only climb down halfway, while I dig a 20 foot well and go all the way to the bottom. I will find the water, if that analogy makes sense. In the simplest possible terms, the bond forms with Mu because the grey area in the middle shrinks even more than the red line increases, allowing the blue line to still drop lower at the right end. It’s not a covalent bond because the electron isn’t in a molecular orbital. It’s not a mere van der Waals interaction (called “bonds” here, though I’ve never called it that before) because it isn’t merely due to electrostatic stabilization. It’s a quirk of particle physics temporarily preventing three species from physically dissociating, so yes, it seems to me that it is fair to call this “a new type of chemical bond.”

So, what this means is that there’s a new type of chemical bond that needs to be added to text books. However, don’t expect this paper to radically change chemistry for the majority of modern scientists. This ‘new’ bond type, if it holds up over the next few years, is a very specific case. It won’t drastically change the way chemistry is viewed because most bonds are characterized by the dominant type of bonding (covalent, ionic, metallic, other/secondary). Findings appeared in the journal Angewandte Chemie International Edition.