NASA finds methane on Mars, indicates life may have existed

After an exhaustive analysis conducted over a year and a half, NASA's Curiosity Rover has finally confirmed the existence of methane on Mars, somewthing which indicates that life may have existed (or still exist) on Mars.

by Mihai Andrei
in Alien life, Chemistry
Reading Time: 2 mins read
A A
Share on FacebookShare on TwitterSubmit to Reddit

After an exhaustive analysis conducted over a year and a half, NASA’s Curiosity Rover has finally confirmed the existence of methane on Mars, somewthing which indicates that life may have existed (or still exist) on Mars. 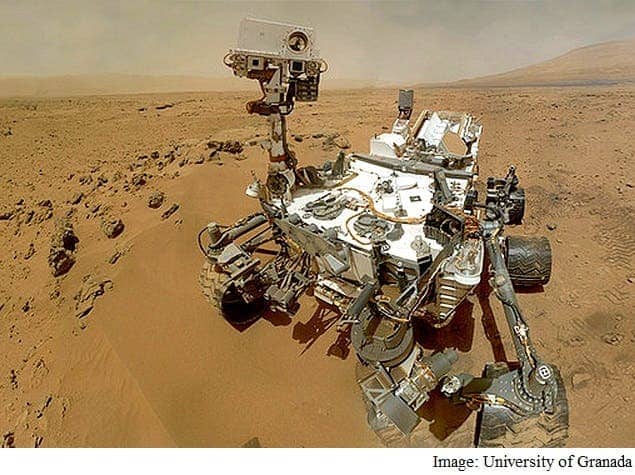 In 2013, when Curiosity conducted the first analysis for methane, it didn’t find anything – something which took NASA by surprise. The existence of methane would be a good indication of life on Mars, though it can be produced without life, and life can also exist without producing it. Not finding any of it was a big blow which left scientists scratching their heads. Now, astrobiologists can rest at peace – methane does exist on the Red Planet.

“It is a finding that puts paid to the question of the presence of methane in the Martian atmosphere but it does pose some other more complex and far-reaching questions, such as the nature of its sources,” said study co-author Francisco Javier Martin-Torres from the Andalusian Institute of Earth Sciences (CSIC-UGR) at the University of Granada, Spain.

Methane is an organic chemical compound made of one atom of carbon and four atoms of hydrogen. In its natural state on Earth, methane is found both below ground, and under the sea floor, where it often finds its way to the surface and in the atmosphere. However, on Mars, it’s not clear how the methane might form.

“The sources, we believe, must lie in one or two additional sources that were not originally contemplated in the models used so far. Among these sources, we must not rule out biological methanogenesis,” he added.

According to currently existing models, methane would take 300 years to leave the Martian atmosphere – so if we found methane now then it was likely produced sometime in the pas 300 years. If it is indeed of biological origin, then the life forms which produced it still exist today.

The finding was made with the tunable laser spectrometer in the SAM (Sample Analysis at Mars). Spectroscopic techniques in general have a great potential for detection and monitoring of constituents in gas phase and they are highly sensitive to any change in concentration – so it’s extremely unlikely that Curiosity was wrongl.