As you probably (and should) know already, symbiosis is a close interaction (often long term) between different species, both of which have something to win from this deal. But symbiosis between animals and bacteria… that’s definitely something new. 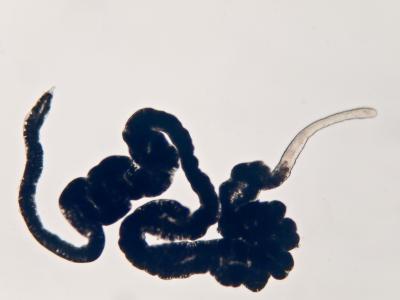 This kind of environment seems dead, desert-like and empty, but if you were to take a closer look, particularly close enough to see the fauna in the space between sand grains, you’d definitely be surprised. A diverse and special fauna thrives in this environment, including bacteria and protozoa, but also numerous animal phyla, some of which are unique to this habitat. Out of these species, perhaps the most interesting is Paracatenula, a mouthless and gutless flatworm, found from tropical areas to the Mediterranean.

Ever since this species was discovered in the 1970s, mystery surrounded it; how on Earth could it feed, with no mouth and no gut ? In order to find the answer to this riddle, researchers had to dig deeper, in the deep ocean hot vents, where giant mouthless tubeworms were found, similar in many ways with Paracatenula. What they found was that these worms live in symbiosis with intracellular bacteria that oxidize reduced sulfur compounds.

Paracatenula indeed has symbionts which are sulphur-reducing bacteria, but even more specifically it’s about Alpha-Proteobacteria, which is a class that includes mitochondria, which are basically the power plants in the cells of all higher organisms.

This symbiosis however is taken to a whole new level; biologists have calculated that bacteria amounts to about half of the tissue of the Paracatenula. Basically, they are all one big team – and they have been so for no less than 500 million years, dating way, way before the dinosaurs were ruling the Earth.
Even