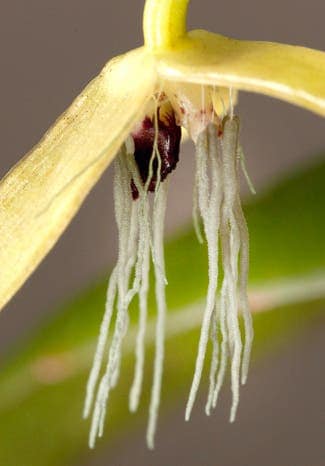 Somewhere off Papua New Guinea, scientists uncovered the world’s only known orchid to produce flowers at night, only to wither down in daytime.

Out of over 25.000 thousand species of orchids, only a handful of them flower in the evening, but this one, Bulbophyllum nocturnum, is the first and only one that does it at night. Botanist André Schuiteman from the Royal Botanic Gardens in the UK is a member of the team which described this unique flower and hailed it as “another reminder that surprising discoveries can still be made”, even nowadays, when we sometimes think we know everything there is to know on our planet.

“The discovery of Bulbophyllum nocturnum is important for various reasons,” André says. “It demonstrates that there are still gaps in our knowledge of tropical orchids and poses interesting biological questions: Why did night flowering evolve in this particular species and not in other orchid groups? Why does this species flower at night?”

Scientists are still unsure as to why these purple flowers has chosen this nocturnal habit, but, as always, it is most likely that nature has simply found an unoccupied niche and occupied it.