Well this is a grisly Halloween story if I've ever seen one.

by Mihai Andrei
in Biology, News, Science
A A

Few things are more horrific than zombification — for humans and cockroaches alike. To escape this grisly fate, the American cockroach has developed a kicking technique worthy of a karate master. 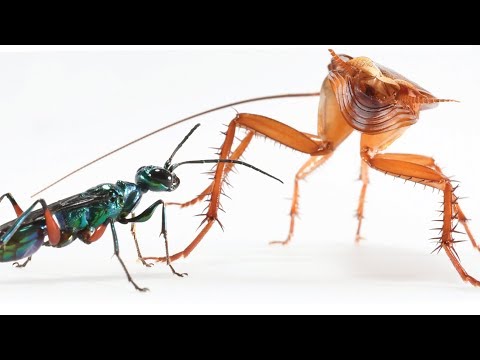 The emerald jewel wasp truly deserves its name — its bright-green color shining as it swiftly moves about. But what really makes it special is its hunting and reproducing strategy. Ever since the 1940s, scientists have noted the wasp’s unusual reproductive strategy, which involves “zombifying” a cockroach and injecting it with larvae. Essentially, the infected cockroach starts grooming extensively, loses its survival instinct and normal responses, and becomes an unwilling host and breakfast for the wasp’s offspring. The whole process is gruesome.

It wasn’t until 2003, however, that another study using radioactive labels showed that the wasp stings precisely into specific ganglia of the roach, mildly and reversibly paralyzing it. This temporary paralysis allows the wasp to inject a secondary dose in the victim’s head, eliminating its escape reflex.

Then, the wasp chews on half of the cockroach’s antennas and — since it is too small to carry it — leads him on to the burrow using the remainder of antennas like a leash. Eventually, the wasp lays a white egg inside the roach, and then leaves, after it fills the burrow with pebbles. The offspring wasp will eat the cockroach’s organs in a way that makes the insect stay alive longer, which increases the survival chances of the offspring. After only one mating session, wasps can successfully parasitize several dozen roaches.

But the cockroach isn’t exactly helpless.

“The cockroach has a suite of behaviors that it can deploy to fend off the zombie-makers, and this starts out with what I call the ‘en garde’ position, like in fencing,” said Ken Catania, a Professor of Biological Sciences at Vanderbilt. “That allows the roach to move its antenna toward the wasp so it can track an approaching attack and aim kicks at the head and body of the wasp, and that’s one of the most efficient deterrents. It’s reminiscent of what a movie character would do when a zombie is coming after them.

Catania studies predator-prey interactions, and he heard about this unusual relationship. He was surprised to see that no one had taken a closer look at how cockroaches try to defend themselves from wasps, so he used ultra-slow-speed video to capture roaches using the mechanism time and again to prove and understand it.

Essentially, before the wasp can get into position and deliver the first sting, the cockroach delivers a swift blow with its spiny back leg. It doesn’t always work, but 63% of adults managed to stay safe this way — which still means that 37% were slain. For juveniles, it was even worse: almost all of them failed in their attempt.

The study was published in Brain, Behavior and Evolution.