by Tibi Puiu
in Animals, Health & Medicine, Mind & Brain, Neurology
A A

Through the halls of TedxDetroit last week, participants were introduced to an unfamiliar and unlikely guest – a remote controlled cyborg cockroach. RoboRoach #12 as it was called can be directed to either move left or right by transmitting electrical signals through electrodes attached to the insect’s antennae  via the Bluetooth signals emitted by a smartphone. Scientists have been doing these sorts of experiments for years now in attempt to better understand how the nervous system works and to demonstrate how it can be manipulated.

Greg Gage and Tim Marzullo – co-founders of an educational company called Backyard Brains and the keynote speakers at the Ted event where the cyborgroach was shown – have something different in mind. They want to send RoboRoaches all over the U.S. to anyone who’d be willing to experiment with them. For 99$, the company sends you a kit with instructions on how to convert your very own roach into a cyborg for educational purposes – actually, it’s intended for kids as young as ten years old and the project’s aim is to spark a neuroscience revolution.  Post-TedxDetroit, however, a lot of people, including prominent figures from the scientific community, were outraged and challenged the  ethical nature of RoboRoaches.

“They encourage amateurs to operate invasively on living organisms” and “encourage thinking of complex living organisms as mere machines or tools,” says Michael Allen Fox, a professor of philosophy at Queen’s University in Kingston, Canada.

“It’s kind of weird to control via your smartphone a living organism,” says William Newman, a presenter at TEDx and managing principal at the Newport Consulting Group, who got to play with a RoboRoach at the conference.

How does the RoboRoach#12 and its predecessors become slaves to the flick on an iPhone touchscreen? In the instruction kit, which also ships with a live cockroach, students are guided through the whole process. First the student is instructed to anesthetize the insect by dousing it with ice water. Then the insects head is sanded with a patch of shell so that it become adhesive, otherwise the superglue and electrodes won’t stick. In the insect’s thorax a grounwire is inserted. Next, students need to be extremely careful while trimming the insect’s antennae before inserting silver electrodes into them. Finally, a circuit fixed to the cockroach’s back relays electrical signal to the electrodes, as instructed via a smartphone Bluetooth.

Gage says, however, that the cockroaches do not feel any pain through out this process, though it is questionable how certain he is of this claim. Many aren’t convinced. For instance  animal behavior scientist Jonathan Balcombe of the Humane Society University in Washington, D.C.  says“if it was discovered that a teacher was having students use magnifying glasses to burn ants and then look at their tissue, how would people react?”

That’s an interesting question, but I can also see its educational benefits of course. It teaches students how quintessential the brain is and how it governs bodily functions through electrical signals. Scientists, unfortunately, heavily rely on model animals like mice, worms, monkeys and such for their research. These animals certainly suffer, but until a surrogate model is found the potential gain convinces most policy makers that this practice needs to continue , despite the moral questions it poses. Of course, this kind of research is performed by adults, behind closed doors, in the lab – not by ten year old children. Also, what about frog dissections in biology classes? Some schools in California have banned the practice entirely, should other schools follow suit? 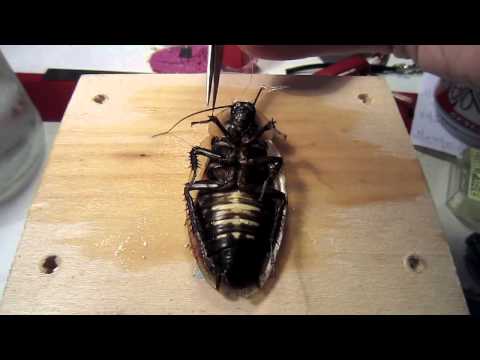 What happens to the roaches after they’re ‘used and abused’? Well, they go to a roach retirement home, of course. I’m not kidding. Gage says that , all students learn that they have to care for the roaches—treating wounds by “putting a little Vaseline” on them, and minimizing suffering whenever possible. When no longer needed, the roaches are sent to a retirement tank the scientists call Shady Acres where disabled insects go with their lives. “They do what they like to do: make babies, eat, and poop.”

Gage acknowledges, however, that he has indeed received a ton of hate mail. “We get a lot of e-mails telling us we’re teaching kids to be psychopaths.”

It’s worth nothing that cyber roaches are being used for some time in research. Scientists  in North Carolina are trying to determine if remote-controlled cockroaches will be the next step in emergency rescue, for instance. The researchers are now hoping that these roaches will be able to be equipped with tiny microphones and navigate their way through cramped, dark spaces in effort to find survivors in disaster situations.

So, ZME readers, what do you think? Should Cyber