Roach bots could be used to explore alien worlds and find survivors in disaster relief operations.

Cockroaches are some of the most resilient creatures in the world. Not only they’re incredibly stubborn pests, cockroaches are masters of escape being capable of quickly hiding in cracks and tiny crevices. They can even survive nuclear warfare, with a cockroach being able to survive 15,000 times the lethal radiation dose for humans. But while cockroaches are generally undesirable, that doesn’t mean we can’t learn from them.

In two related papers (1 and 2), Johns Hopkins researchers studied cockroach locomotion then mimicked it for palm-sized robots. The hope is to one day employ cockroach locomotion in robots that can be deployed in all sorts of rough terrain like a disaster relief site or even an unforgiving alien world.

The team led by Sean Gart, a postdoctoral fellow at Johns Hopkins, first closely followed cockroaches that scurried along tracks laden with two types of obstacles: large bumps or equally large gaps. These obstacles are supposed to mimic the kind of terrain the insects usually encounter.

When a cockroach has to make a run for it, self-preservation is of no consequence. Often, you’ll see cockroaches slam into a wall, only to continue their hastened escape on a different plane, up the walls.

High-speed cameras that filmed cockroaches on the tracks made by the researchers captured such moments. Gart and colleagues note that the cockroach’s head acts like a bumper, dampening the impact and allowing the insect to make a full flip in under 75 microseconds.

“Where they live, you have all sorts of stuff around you, like dense vegetation or fallen leaves or branches or roots,” said Chen Li, an assistant professor of mechanical engineering and senior author of the paper published in Bioinspiration & Biomimetics. “Wherever they go, they run into these obstacles. “We’re trying to understand the principles of how they go through such a complex terrain, and we hope to then transfer those principles to advanced robots.”

The Johns Hopkins researchers applied the lessons they learned about the cockroach’s exoskeleton and passive body shape by designing a multi-legged robot. The contrapton replicates the insect’s locomotion by employing the same underlying physics principles. The researchers even added a “tail” which helps balance the robot’s position similarly to how real roaches navigate large bumps and gaps on the tracks. Thanks to this seemingly unimportant addition, the robot could then traverse gaps and bumps that were 50% and 75%, respectively, larger than before.

To manage all those rough transitions, the researchers also fitted the robot with a cardboard ‘nose’ that mimics the roach’s squishy head.

“We are just beginning to understand how these critters move through a cluttered 3-D terrain where you have obstacles that are larger than or comparable to the animal or robot’s size,” Li said.

Li hopes that his research will lead to a new a class of roach-inspired robots that might one day explore Mars or distant moons. Perhaps, similar robots might also save lives in disaster relief sites following an earthquake or some other calamity, making their way through cracks and rough terrain to find survivors.

This research could genuinely cause a paradigm shift in how scientists design some types of robots, moving away from sensor-based controls in favor of pure body mechanics. In any event, for Li at least, cockroaches have now become a lot more interesting.

“I knew I would be working with these animals, and I was a little scared at first because they just run so fast, and they were so creepy,” Li recalls. “But as soon as I started working in the lab, I learned that it’s actually very easy to work with them, and they’re actually a very nice, fantastic model organism. Not just because they’re so robust and move so fast, but also because they’re very easy to handle and motivate to run and very” 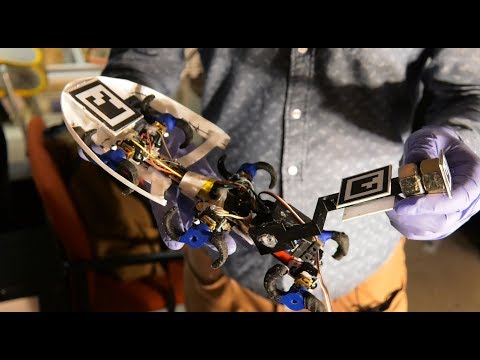