It’s extremely unusual for journals to publish papers from non-scientists, but three gamers will have their thoughts covered by one of the biggest and most respected publishers: the Journal of Molecular Biology. 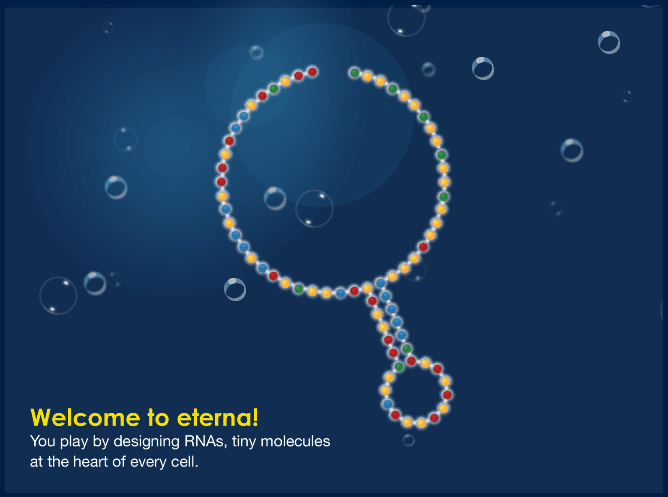 EteRNA is a browser-based “game with a purpose”, developed by scientists at Carnegie Mellon University and Stanford University, that engages users to solve puzzles related to the folding of RNA molecules. The game takes asks the human intellect to solve problems which would otherwise be too laborious or complex for computer programs. The top voted designs are synthesized in a Stanford biochemistry lab to evaluate the folding patterns of the RNA molecules to compare directly with the computer predictions, ultimately improving the computer models and our understanding of RNA.

RNA itself was once dismissed as a “boring” component, but it is now regarded to influence almost every biological process of known life. Each RNA molecule starts out as a single chain of subunits, but it quickly folds into a stable shape that depends on the molecule’s particular sequence of subunits. This folded shape in turn directs how the RNA will interact with other cells. It’s much more flexible than DNA because it is single-stranded, unlike DNA which is double stranded. Better understanding of these geometries offers promise for a new generation of RNA-based therapies customized to specific cancers, viruses, neurological abnormalities and inherited disorders. However, RNA geometry can be extremely complicated, and is established by rules we don’t yet understand. This is where EteRNA and the games come into the picture. 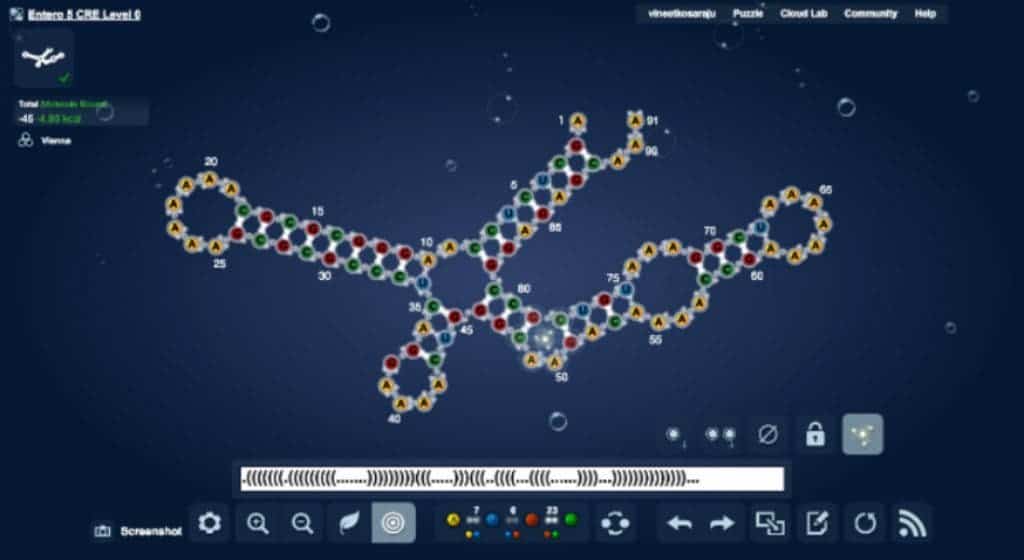 “The paper describes a new set of rules, derived intuitively by players of a video game called Eterna, for determining the difficulty of designing desired structures composed of RNA molecules. Unlike previous crowdsourcing efforts for which scientific experts have reached out to online gamers, the gamers themselves took the lead in this paper,” writes Stanford’s Bruce Goldman.

The game itself is easy to play and doesn’t require any knowledge of RNA or biology. Anyone aged 13 and above can play it. The idea behind it is that it can be very difficult for a biomedical researcher to design an RNA structure for a diagnostic or therapy, and therefore may waste significant time and money trying to create difficult or near-impossible shapes for an RNA molecule to assume. Generally speaking, biomedical scientists don’t have the best skill set or geometrical creativity for this – because in a way, this is pure geometry and not biology. So they figured out – why not crowdsource it? People playing a lot of video games can invest not only more time and effort (while also having fun), but can also be better equipped to solve such a challenge.

The results were successful and visible from the start. Experienced gamers were able to solve puzzles in a way that neither biologists or computer algorithms could – even when powered by supercomputers. Several papers were published involving this game, but all of them were supervised by a professor or researcher in the field – until now. This paper is the condensed collection of thoughts of Jeff Anderson-Lee, Eli Fisker, Vineet Kosaraju and Michelle Wu – players of the Eterna Massive Open Laboratory. Truth be told, Wu is also a PhD student in biomedical informatics at Stanford so that definitely helps with writing the paper. They received funding from several organizations, including Stanford.

The most striking finding they report is that most RNA molecules are symmetrical. The ones that are symmetrical, are pleasing to the eye and fold stably, but they are also harder to design; the more symmetrical the desired shape, the more difficult to achieve it.

Looking at things in a broader perspective, this could signal the dawn of a new age in science. Modern science has a trove of data that scientists don’t have the resources to analyze – and this is where we can help. Crowdsourcing has proven successful several times before, and more organizations are asking for the people’s help to solve problems – it’s an innovative, out-of-the-box approach, and it seems to work. NASA for instance has several projects in which they ask people to look at stars or galaxies for example.