Stem cell research is still extremely controversial and problematic due to the numerous financial, social, and political pressures often applied on this kind of study. However, as some of the biggest companies working in the field throw the towel, others claim they will not stop their pioneering work, that bring eyesight to the blind and cure broken hearts (literally). 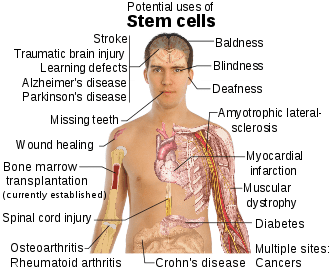 Scientists worldwide were shocked U.S. biotech company Geron Corp announced on Monday they will quit stem cell research, blaming this decision on the lack of money and the complexities of getting regulatory approval. However, teams working on less ambitious adult stem cells project are doing just fine.

“It’s a tale of two ends of the market. I believe the adult stem cell space was always more attractive anyway,” said Navid Malik, a biotechnology analyst at Merchant Securities.

However, science has received a significant blow with the shutdown of this company. Stem cell treatment offers a totally unique and revolutionary way of treating diseases and a number of conditions, which are otherwise incurable and cause the suffering and death of millions. Heart diseases, Parkinsons, kidney failure – these are just a few of the ones that could be helped by this revolutionary treatment.

What happens is embryonic stem cells are harvested from embryos and have the potential to become almost any type of tissue; on the other hand, adult stem cells are less controversial (because they come from adults), but they are also much less flexible, and can only become a number of tissues.

In a more advanced study, researchers were testing an embryonic stem cell treatment aimed at helping patients with spinal cord injuries like the late Superman actor Christopher Reeves – who was paralyzed in an accident.

Making superman walk would have been great for business but was an ambitious target for a serious problem and maybe not the best start scientifically or clinically for stem cell therapies,” said Alison Murdoch, head of the fertility center at Britain’s Newcastle University.

What do you think about embryonic stem cell research ? I’ve asked myself and the ones around me this question numerous times, and I’ve received the most varied and surprising answers.