by Tibi Puiu
in Animals, Biology
A A

The dung beetle is an extreme survivor. Not only does it feed on poop, but it also fashions a hefty ball out of it, up to 50 times its own mass, that it rolls through the scorching desert. We’re talking 60 degrees Celsius here. A new study that has closely followed this truly remarkable creature has found that the dung beetle is even more ingenious than previously thought, as it uses its poop ball not only as a means of transportation and food supply, but also for cooling.

“Dung beetles are the first example of an insect using a mobile, thermal refuge to move across hot soil,” researcher Jochen Smolka, a neuroethologist at Lund University in Sweden, told LiveScience. “Insects, once thought to be at the mercy of environmental temperatures, use sophisticated behavioral strategies to regulate their body temperature[s].”

These findings came after scientists studying the dung beetle’s peculiar, dance-like ritual performed on top of its ball observed that this behavior was more frequent during the midday – when it’s also the hottest. They then thought to use thermal vision cameras to watch the Scarabaeus (Kheper) lamarcki as it moved through two specially built sand arenas, as a measure of experimental control. One of the arenas was shaded to a relatively cool 124.3 degrees F (51.3 degrees C), while the other was left completely exposed to sunlight and reached up to about 135 degrees F (57.2 degrees C).

The researchers note that the beetle climbed the dung ball seven times more often on hot ground than on shaded ground. Then the scientists had a blast and gave the dung beetle some nice dancing shoes – painted rubbery boots made of silicone onto the insect’s legs, designed to protect them from the scorching heat. The fine boots also, in turn, made the dung beetle comfortable enough not to climb its ball that often. 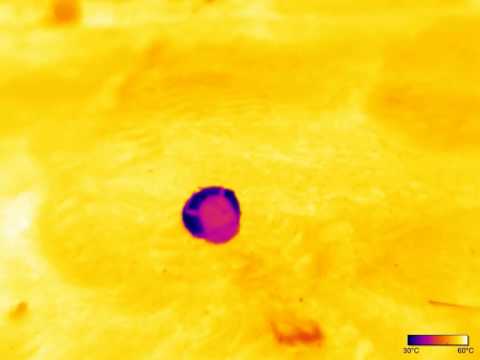 How does the dung ball keep the insect cool, though? Well, the researchers found that once on board, the dung beetle spreads regurgitated liquid onto its legs and heads, in a wiping gesture. This behavior has never been seen in other times of the day, except daytime.  Also, the dung ball is remarkably cool, staying at 32°C, since it has a lot of water, which is constantly evaporating. The researchers found the front legs of the beetles cooled by about 7°C on average within 10 seconds of climbing on their excrement balls.

Findings were documented in the journal Current Biology.