by Tibi Puiu
in Animals, Biology, Studies
Reading Time: 3 mins read
A A
Share on FacebookShare on TwitterSubmit to Reddit

Last year, we reported on one of the most gruesome and horrific acts that goes on in nature; it seems so unreal, like if some sort of SciFi monstrous scenario transcended into the realm of reality, that one has a hard time wrapping his head around it. Yes, as some of you might have read previously, I’m talking about the zombie-ant fungus or Ophio­cordy­ceps. These parasite fungi infect tropical ants, literary taking control of their actions, ultimately leading the infected ant to march to its death at a mass grave near the ant colony, where the fungus spores erupt out of the ant’s head so it can spread even further. 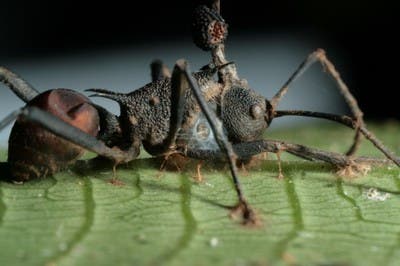 Now, scientists at Penn State University who have been studying interactions between the zombie-fungus and their host ants have found that there’s a third player at work. Coming to the rescue of the tropical ants, it seems, is another fungi – a parasite of parasite, typically referred to as an hyper-parasite. So, the counter-par­a­sites keep the first one in check and help pre­vent it from over­run­ning en­tire ant col­o­nies.

“In a case where biology is stranger than fiction, the parasite of the zombie-ant fungus is itself a fungus — a hyperparasitic fungus that specializes in attacking the parasite that turns the ants into zombies,” Hughes said. The research will be published in the journal PLoS ONE.

“The hyperparasitic fungus effectively castrates the zombie-ant fungus so it cannot spread its spores,” said Hughes, who is an assistant professor of entomology and biology, and a member of the Center for Infectious Disease Dynamics at Penn State. “Because the hyperparasitic fungi prevents the infected zombie-ant fungus from spreading spores, fewer of the ants will become zombies.”

The team of biologists, lead by Hughes, created a detailed model which offered extra insights regarding the fungus-infected ants and the parasite-infected zombie-ant fungus interaction. Previously, scientists had known that ants ward off infections by carefully grooming each other, now the model reveals the effect of ant behavior on limiting infection. Nature often sends in unexpected allies to aid those threatened by atypical enemies.

The findings were reported in the journal PLoS ONE.