Found in the tropical landscapes of Brazil (where else?), Philcoxia minensis has developed quite an interesting mechanism to feed: it uses sticky underground leaves to trap tiny roundworms. 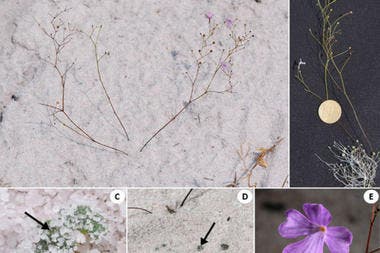 This rare plant has a few leaves above the ground as well, but most are below; until now, biologists were unaware that plants could actually feed like this.

“We usually think about leaves only as photosynthetic organs, so at first sight, it looks awkward that a plant would place its leaves underground where there is less sunlight,” said researcher Rafael Silva Oliveira, a plant ecologist at the State University of Campinas in Brazil. “Why would evolution favor the persistence of this apparently unfavorable trait?”

Researchers though suspected the mysterious plant of doing something special, due to the numerous similarities it has with other carnivorous plants. To test their theories, they fed the plant nematodes loaded with the isotope nitrogen-15, atoms of which have one more neutron than regular nitrogen-14. Basically, they put worms on top of underground leaves of plants, to see if the plants could digest them. The results were conclusive: the plant eats worms.

“I personally think these findings also broaden up our perception about plants,” Oliveira added. “They might look boring for some people because they don’t move or actively hunt for their food, but instead, they have evolved a number of fascinating solutions to solve common problems, such as the lack of readily available nutrients or water. Most of the time, these fascinating processes of nutrient acquisition are cryptic and operate hidden from our view.”