Just like squirrels set aside some nuts for winter, so do arctic foxes – they hoard bird eggs and bury them in the Arctic permafrost for when they don’t have enough food.

“It appears as if cached eggs are used as a backup for unpredictable changes in lemming numbers,” lead study author Gustaf Samelius of Grimsö Wildlife Research Station in Riddarhyttan, Sweden told National Geographic. “This is a neat adaptation in an environment where food abundance changes dramatically both among seasons and years.”

“Our results of about 50 percent of the [arctic fox’s] diet coming from cached foods might be on the extreme end” compared with other meat-eaters, Samelius said.

The favorite food of arctic foxes is the collard lemming. However, collard lemming populations severely fluctuate over three- to five-year cycles, and depending on these cycles, arctic foxes rely on what they set aside. The good thing for them is that egg birds are very well suited for long term storage in cold conditions. 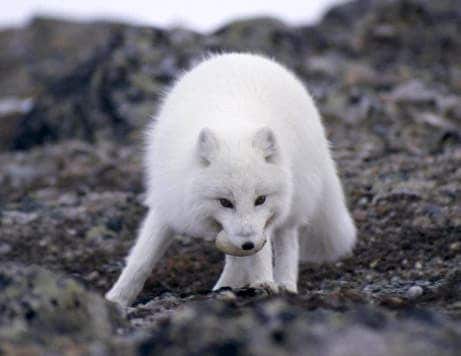 Many biologists and explorers suspected this, upon finding many eggs buried, but until now, there was no clear evidence of this. Vincent Careau is an arctic-fox researcher at the Université de Sherbrooke in Quebec who was not involved with the study. He also had his suspicions:

“Many noted the presence of egg shells in fox scats while there was no goose around, meaning that the consumed egg was inevitably recovered from a cache,” Careau said, “but these observations remained anecdotic until this study came out.”

How the foxes find the eggs after such long periods is still not understood yet though.