Giant, tubular creature is not a worm, but a free-floating colony

by Mihai Andrei
in Great Pics, Offbeat, Other
A A

It’s one of the most amazing creatures you’ve never heard about: the pyrosome. It often looks like a giant inflatable underwater balloon, or a tube-like worm, but it’s actually made of hundreds or thousands of individuals known as zooids.

“One long pyrosome is actually a collection of thousands of clones, with each individual capable of copying itself and adding to the colony,” writes marine biologist Rebecca Helm in Deep Sea News. 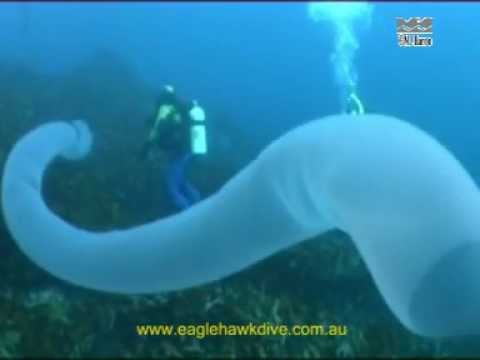 Each zooid is only a few millimeters in size, but all of them are embedded in a common gelatinous tunic.Each zooid opens both to the inside and outside of the “tube”, drawing in ocean water from the outside, feeding on microscopic plant cells and then expelling the filtered water to the inside of the cylinder of the colony. When they feed, they also set the entire colony in motion. When the zooids pause this process, the colony can sink 500-700 (1,640-2,295 ft) meters below the surface of the sea, according to New Scientist.

While they typically measure several centimeters in length, they sometimes grow much more than that – up to 12 meters (40 feet). As if that wasn’t spectacular enough, they can also be brightly bioluminscent – emitting bright light. The name pyrosoma actually means fiery body, and it can sometime shine so spectacularly, that 19th century Thomas Huxley, Aldous Huxley’s grandfather, wrote in 1849:

“I have just watched the moon set in all her glory, and looked at those lesser moons, the beautiful Pyrosoma, shining like white-hot cylinders in the water.”