Octopus is so cute that ‘Adorable’ might become its name

Among the best thing about being a biologist is you get to name things when you discover it. Now, a marine researcher in California will name one of the cutest invertebrates we've ever seen: so adorable, that it might actually be named 'adorabilis'.

by Alexandra Gerea
in Animals, Biology, News
A A

Among the best thing about being a biologist is you get to name things when you discover them. Now, a marine researcher in California will name one of the cutest invertebrates we’ve ever seen: so adorable, that it might actually be named ‘adorabilis’.

An octopus is a cephalopod mollusc of the order Octopoda. It has two eyes and four pairs of arms and, like other cephalopods, it is bilaterally symmetric. An octopus has a hard beak, but no internal or external skeleton. In mythology, they have been portrayed as monsters, but the small creature discovered by Stephanie Bush, who works for the Monterey Bay Aquarium Research Institute studies can certainly not be called a monster.

“As someone that’s describing the species you get to pick what the specific name is. One of the thoughts I had was making it Opisthoteuthis adorabilis — because they’re really cute.”

Scientists have known this species exists since the 1990s, but we still don’t know much about it. The cephalopod generally grows to 7 inches long and it somehow manages to survive an extremely hostile environment, diving to depths between between 300 and 450 meters (984 to 1,476 feet). It also seems like they can’t survive in captivity. Last year the researchers at the MBARI gathered a number of the new octopuses. A few survived in captivity at the Monterey Bay Aquarium. They were put on display but sadly, they only managed to survive for a few months. However, one not only survived, but also laid eggs which she has been hatching for a year, giving researchers hope. 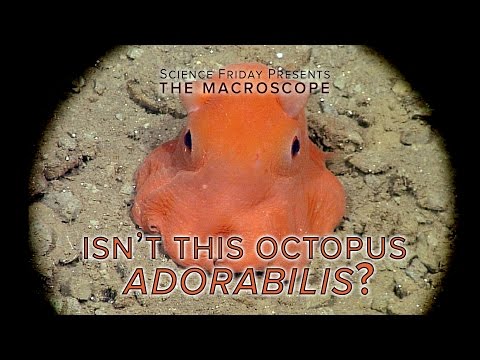