Thought octopuses only live in water? Watch David Attenborough explain how the only land octopus hunts

If you thought octopuses were amazing, wait 'till you see this.

by Tibi Puiu
in Animals, News, Videos
A A

Octopuses are some of the most amazing creatures out there. They have three hearts, use tools, and they’re some of the most masterful camouflagers. Out of all octopus trivia, however, you most likely consider the fact that these animals live in water boring and not worth mentioning. But that’s not even entirely true. One particular species called Abdopus aculeatus is actually adapted to living on land and even walks using the hundreds of tiny sucklers that line its eight, venomous arms.

Abdopus aculeatus is an intertidal octopus described from the Philippines and common throughout Indonesia and northeastern Australia. This small species of octopus mainly forages for portunid and calappid crabs, sometimes crawling or swimming approximately 3–5 m to catch one. When tides are low, this octopus can become stranded in puddles. But that’s not much of a problem as A. aculeatus literally walks from puddle to puddle looking for a delicious crab morsel.

Ever resourceful, this amazing octopus’ behavior was caught on film by the BBC Earth crew which aired a brief documentary about it, with the one and only Sir David Attenborough narrating. 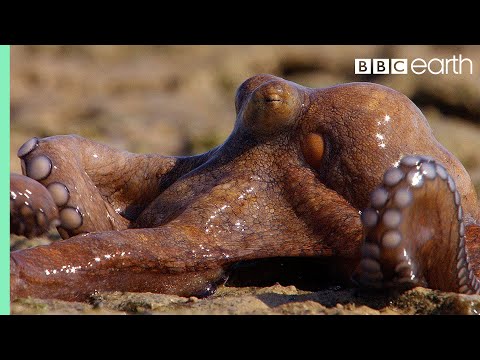