The fish that mimics the mimicking octopus

by Tibi Puiu
in Animals, Research
A A

Off the coast of Sulawesi in Indonesia, dwells the Thaumoctopus mimicus commonly refered to as the mimic octopus, a remarkable animal capable of changing its shape and size to take the form of a jellyfish, a lion fish or even a crab or shrimp, among many other, for both protection against predators and as a shrewd disguise for hunting pray easier. A group of researchers, have now observed in the same waters, however, a peculiar jawfish that mimics the mimicking octopus – the master has finally been deluded, himself.

Godehard Kopp was diving and filming in waters preferred by the mimic octopus, when suddenly he observed a jawfish swimming in a perfect synchronized timing with the octopus, posing as an extra tentacle.  The German researcher immediately sent the footage to scientists at California Academy of Sciences for an expertize. It was unanimously agreed that this kind of behavior has never been observed before.

“It’s a pretty unique observation of mimicry — most of the time, a mimicking animal doesn’t actually follow the model it is mimicking,” Luiz Rocha of California Academy of Sciences told LiveScience. “But the mimicry wouldn’t work otherwise for this jawfish.”

With brown-and-white markings similar to ones on the octopus it was following, the black-marble jawfish is believed to have first evolved its coloration, before realizing it can be used as an excellent cover when coupled with a mimic octopus. Check out this incredible jawfish in action as it swims in perfect tandem with the octopus in the video right below. 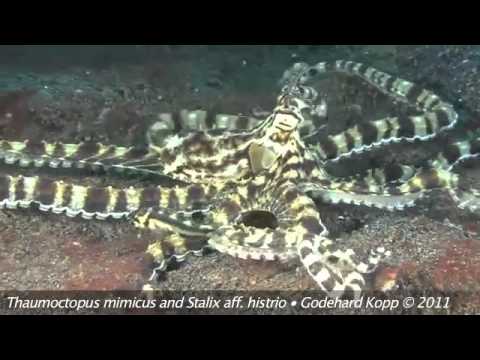 “Those jawfish that did gain this advantage survived more often and got more offspring, so this behavior spread throughout the population,” Rocha explained.

“Unfortunately, reefs in the Coral Triangle area of southeast Asia are rapidly declining mostly due to harmful human activities. We may lose species involved in unique interactions like this even before we get to know them.”