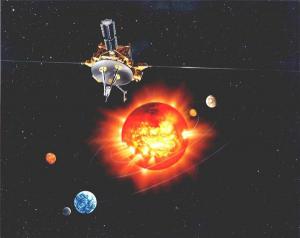 The Ulysses spacecraft today is making a very interesting and important rare flyby over the sun’s north pole. This spacecraft is different from anyother, being able to sample winds at the sun’s poles, which are difficult to study from Earth. However, this is not the first time it has been over the Sun’s poles; this has happened before in 1994-95, 2000-01 and 2007.

This may give scientists new and interesting insights about the Sun and its cycles.

“This is a wonderful opportunity to examine the sun’s north pole within a transition of cycles,” said Arik Posner, Ulysses program scientist at NASA Headquarters in Washington. “We’ve never done this before.”

Many believe that the sun’s poles are the place to start searching for the clues which we have yet to find about its activity and thus we could understand things which more or less directly affect us.

Each previous analyze has revealed something interesting and we probably won’t be dissapointed this time either. The polar temperature was a very hard puzzle to solve. In the previous solar cycle, the magnetic north pole was about 80,000 degrees Fahrenheit (more than 44,000 degrees Celsius), or 8 percent cooler than the south. Since this flyby is about a year later than the previous, it is going to be more easy to solve the problem of polar temperatures by comparing it to that of the previous year.