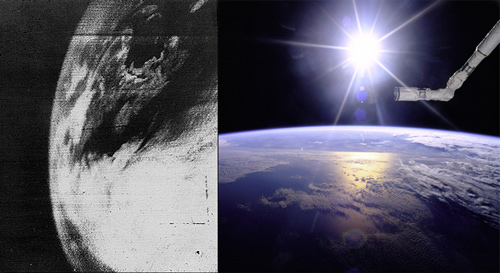 So what better way to prove the progress of technology than 2 pictures of Earth? The first was taken from the weather satellite TIROS-1, on April 1, 1960 (no, no joke). These early pictures had a great importance for meteorologists which had more information about how cloud systems were formed and they were especially interested in spiral formations associated with large storms. Also, it wasn’t until this picture that pretty much everybody was convinced that the Earth was round.

The photo from the right was taken by the space shuttle Discovery’s robotic arm during the STS-77 mission in 1996, and shows Earth laid out in splendor beneath the bright sun. Hopefully people will look at these pictures and be reminded that the Earth is interconnected and that life in its greatness must be respected and loved.

So now one can only wonder how will a picture from Earth look like 50 years from now? What do you think? Or perhaps we’ll be taking pictures of other planets? Who knows… we can just stick around and find out.

Thanks to space.com for this.