Terrestrial Planets might form around stars similar to the Sun

by Mihai Andrei
in Space
Reading Time: 2 mins read
A A 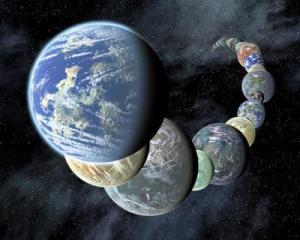 What seemed to be a very natural and obvious conclusion needed a whole lot of studies and research to be proven; terrestrial planets might form around many, if not most, of the nearby stars which are similar to the sun, or at least resemble it greatly. These studies suggest that life may be actually quite common in our galaxy.

Michael Meyer from the “>University of Arizona led a Legacy Science Program with NASA’s Spitzer Space Telescope to determine whether planetary systems like ours are common or rare in the Milky Way galaxy. They found that at least 20 percent, and possibly as many as 60 percent, of stars similar to the sun are candidates for forming rocky planets.

“We wanted to study the evolution of the gas and dust around stars similar to the sun and compare the results with what we think the solar system looked like at earlier stages during its evolution,” Meyer said.

“An optimistic scenario would suggest that the biggest, most massive disks would undergo the runaway collision process first and assemble their planets quickly. That’s what we could be seeing in the youngest stars. Their disks live hard and die young, shining brightly early on, then fading,” Meyer added.

Now it remainsto be seen whether these studies will actually be important, or whether they will remain just of statistic importance.