Hubble Back In Business: Pair Of Gravitationally Interacting Galaxies 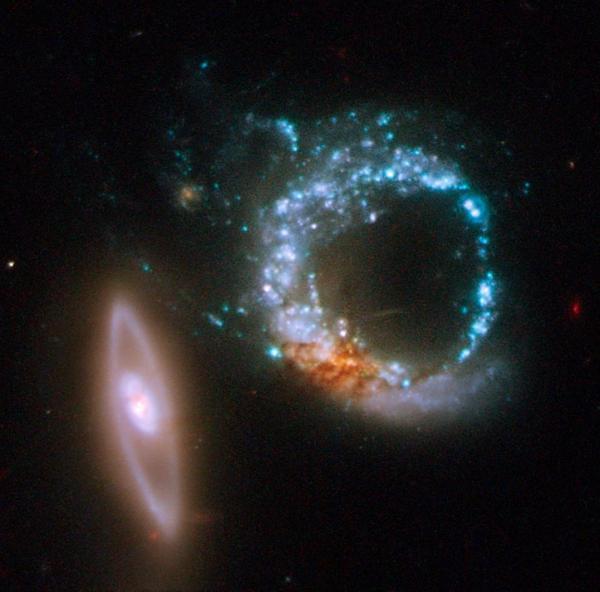 A while ago we were a bit worried about the future of Hubble, but it seems the people at NASA managed to once again do an amazing job, so the most well known telescope is back in business, and up to big things actually.

Just a few days after it was brought back online, Hubble provided some amazing images of the fascinating galaxy pair Arp 147. It aimed its primary camera towards the pair, and managed to score a perfect ten for both image and clarity, and it managed to score a ten for something else too. If you look with a bit of imagination towards the picture, you can actually see the number formed from the two galaxies. That’s really not something you see every day. The galaxy in the left is relatively undisturbed, having just a smooth ring of starlight to make it a bit special; but on the other hand, the right galaxy is really wicked, with an intense clumpy, blue ring of star formation.

What happened is easy to understand; but if you start to think about it a bit more, it just blows your mind. Basically, the galaxy from the left passed through the galaxy from the right. Just as you would throw a rock in a lake, and it would create outward circular waves, a propagated ring of higher density was generated; as this density collided with other material, the gravity forces of the two galaxies moved in and started stimulating star formation.

The reddish dust at the lower part of the ring is probably where the original nucleus of the galaxy was. Still, the forces and processes that are happening there are hard to comprehend for even the brightest minds, let alone understand the full mechanism. But even for the profane, such a magnificent pair is amazing.